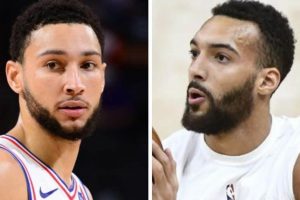 Ben Simmons is trash talking his way to Defensive Player of the Year honours.

The Aussie NBA stud threw plenty of shade at a two-time winner of the award, and a challenger for this season’s title, Rudy Gobert, in a not-so-subtle suggestion the Utah Jazz star isn’t in his league.

Speaking to ESPN basketball host Rachel Nichols, Simmons talked up his own defensive attributes while belittling Gobert’s, referencing a game earlier this year when the Philadelphia hotshot poured in a career-high 42 points against the Jazz.

“I’m one of those guys who can guard one through five (of the opposition),” Simmons said.

“Obviously, there’s a lot of respect for Rudy. I know what he’s capable of. I know he’s great down there in the paint, but he’s not guarding everybody and that’s just what it is.

“It is what it is, but I have a lot of respect for him. At the same time, I think it’s mine this year.”

It’s not the first time Simmons has taken a lighthearted jab at Gobert. During last year’s shutdown because of the pandemic the 76ers player said Gobert wasn’t even in the top five best defenders in the NBA, and after his 42-point haul in February he took aim again.

“I loved it when I saw Rudy was guarding me,” Simmons said at the time. “I love being able to go at somebody like that. I felt like it was a little bit of a disrespect putting him on me, but it is what it is.”

Simmons is a defensive beast.Source:AFP

Gobert has been on the receiving end of some pot shots.Source:Getty Images

Simmons has said publicly his primary goal is to be crowned the best defensive player in the league. That gong went to Milwaukee’s Giannis Antetokounmpo last season, but there’s no doubting Simmons is the frontrunner this time around.

He’ll have to fend off challenges from Gobert and Sixers teammate Joel Embiid, but the 24-year-old believes he’s earnt the right to sit at the top of the pile.

Simmons’ work without the ball this season has been on another level — building on an already impressive defensive masterclass last season.

His coach in Philly, Doc Rivers, has sung Simmons’ praises, telling ESPN recently: “He literally, at times, swallows players and I’ve not seen that.”

Simmons’ pride in prioritising his defence is obvious, and it’s why he isn’t overawed by the threat posed by a Brooklyn Nets superteam consisting of NBA megastars Kyrie Irving, James Harden and Kevin Durant.

“I take pride in defence. I know if I’m able to get stops and give guys a hard time doing their job then we’re going to be able to go further.

“They have a lot of talent, but at the same time you’ve got to be able to play together as a team.”