Ben Simmons trade rumors: 4 offers for 76ers to consider from Trail Blazers, others 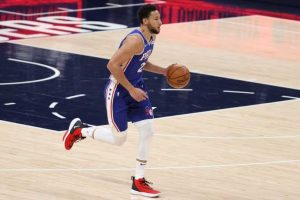 Ever since the Hawks eliminated the 76ers from the 2021 NBA playoffs in late June, Philadelphia star Ben Simmons has found himself at the center of trade rumors. It felt as though Game 7 of the Eastern Conference semifinals marked a point of no return for the relationship between Simmons and the 76ers, especially after Doc Rivers and Joel Embiid’s less-than-flattering postgame comments.

And yet, with less than 70 days to go before the start of the 2021-22 NBA regular season, Simmons remains a member of the Sixers. A deal involving the three-time All-Star will be complicated to pull off not only because of his contract — Simmons is owed more than $146 million through the 2024-25 season — but also because of Philadelphia’s exorbitant asking price.

The Athletic’s David Aldridge reported earlier this month that Philly is “seeking control of at least four future first-round picks via direct trade or pick swaps, along with an All-Star-level player in most (but not all) scenarios.” Yeah, 76ers president of basketball operations Daryl Morey and general manager Elton Brand are shooting pretty high here.

How about we help them out by presenting few fake Simmons trades? Let’s dive in…

Ben Simmons to the Trail Blazers?

Why it would work: This is the Sixers’ home run deal. They would get an in-his-prime star who fits well alongside Joel Embiid and eliminates any of those pesky spacing concerns. The Trail Blazers would begin their rebuild with a 25-year-old who is under contract for a few more seasons, plus a intriguing young guard in Maxey and additional draft picks and swaps.

Why it wouldn’t work: At this point, Lillard is expected to start the 2020-21 campaign in a Portland jersey. ESPN’s Zach Lowe recently reported that Lillard is “not available” and “has not asked for a trade.” Until that part changes, Philadelphia won’t be able to get the guy it really wants.

Why it would work: Consolation prize? No one will confuse McCollum for Lillard, but the veteran guard is coming off a season in which he averaged a career-high 23.1 points per game and shot over 40 percent from 3-point range on high volume. He would give the 76ers some desperately needed perimeter creation.

Why it wouldn’t work: McCollum, Little and draft picks is a more realistic return than Lillard for the Sixers, but is a borderline All-Star as the headliner something Morey and Brand would accept? It is also unclear whether the Trail Blazers are pushing hard for a McCollum trade. The Athletic’s Jason Quick noted that Portland “won’t move him just to have a different look next season,” and it seems likely that Trail Blazers general manager Neil Olshey “will run back the same starting five.”

Ben Simmons to the Kings?

Why it would work: There isn’t a huge name in this trade package, but the 76ers could add multiple contributors. Hield is an elite sharpshooter (40.6 percent 3-pointers for his career) and could thrive in a winning environment. Haliburton, who finished third in Rookie of the Year voting behind LaMelo Ball and Anthony Edwards, has the potential to grow into a terrific point guard. Bagley hasn’t lived up to expectations, but he is only 22 years old. This deal would also allow the Kings to clear out a crowded backcourt and give Summer League standout Davion Mitchell more minutes.

Why it wouldn’t work: With Embiid entering his peak years and the team very much in win-now mode, Philly may not be willing to wait for Haliburton and Bagley to fully develop. None of the players in this deal are nearly as dynamic as Lillard and McCollum. From Sacramento’s perspective, when does the price for Simmons become too high?

Ben Simmons to the Spurs?

Why it would work: San Antonio is reportedly among the teams interested in acquiring Simmons, who has some Spurs-ian qualities and would be a welcome addition to the roster. Philadelphia can take advantage of that interest by taking back multiple pieces from the Spurs, including Murray, a 24-year-old guard with a terrific defensive skills and some offensive upside.

Why it wouldn’t work: The Spurs just don’t have the “wow” factor to blow away the Sixers. Philadelphia would probably ask for a bunch of picks and swap options to make up for the fact that none of these guys are currently more than decent role players, and San Antonio likely wouldn’t give away everything just for Simmons.