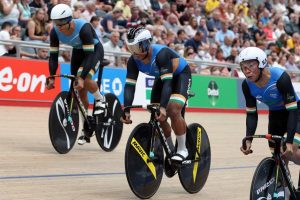 India's hopes for a first-ever Commonwealth Games medal in track cycling rest on the shoulders of some familiar names.

Ronaldo and David Beckham are well known in the sporting world, but not the pair who will line up at the Lee Valley VeloPark. Ronaldo Singh Laitonjam and David Beckham Elkatohchoongo will represent India in a number of events on the track.

The 20-year-old and 18-year-old respectively were both named after their more famous namesakes – with the pair at the peak of their powers in the late 90s and early 2000s. India have never won a medal on the velodrome, and their hopes now rest on the pair.

He was named after the Brazilian due to his stunning goal against England at the 2002 World Cup. Ronaldo Singh told Hindu: "Just as the ball went in the goal, I must have started making an appearance.

“I think my dad won some money that day. That's probably why I got that name. He felt I was very lucky for him.”

Which sporting superstar would you name your child after? Let us know in the comments section below

Elkatohchoongo, on the other hand, comes from a Manchester United mad family. And as fate would have it, his favourite footballer just so happens to be the English legend.

The pair have had relative success in the junior ranks, but they face a tough challenge if they want to podium at the Commonwealth Games as they square off with some more established stars.