Home » Anthony Edwards has no idea who Alex Rodriguez, potential Timberwolves owner, is 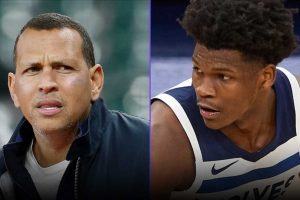 Anthony Edwards, meet Alex Rodriguez: Your potential future boss. Oh, and only one of the most singularly talented, charismatic and controversial MLB players this millennium.

As Rodriguez and e-commerce billionaire Marc Lore continue to finalize a deal with current Timberwolves owner Glen Taylor to take over the Minnesota franchise, reporters began asking current players their thoughts on their potential new boss.

But Edwards, the rookie out of Georgia, has no idea who Rodriguez is, as this exceptionally funny video showcases:

Hey, at least he’s honest. And the explanation that he simply doesn’t watch baseball — as if only MLB fans know Rodriguez — is pure comedy. It’s not as if Edwards doesn’t understand the sport of baseball, either. In the video below, he describes how he was talented enough as a multi-athlete star to play in MLB had he decided to take that career route:

To be fair, Edwards, 19, wasn’t even born yet when Rodriguez began his MLB career in 1994 with the Seattle Mariners. And he was just 15 years old when Rodriguez hung up the cleats for the final time after the 2016 season.

Still, you’d think he would have at least heard of someone who was a 14-time All-Star selection, three-time AL MVP, two-time Gold Glove Award winner and 10-time Silver Slugger Award winner, among other accolades. And that’s to say nothing of his controversial PED use, which cost Rodriguez the entirety of the 2014 season due to suspension.

Look at it this way: If Rodriguez ends up gaining ownership of the Timberwolves, Edwards will have plenty of future opportunities to learn more about his new boss.