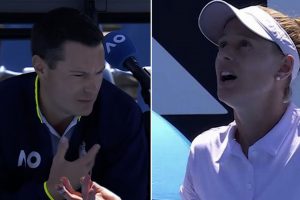 The American tennis player and her partner Linda Fruhvirtova came from a set down to beat Natela Dzalamidze and Alexandra Panova 6-7 (4-7), 6-4, 7-5 in their first round match on Friday. However, the second set was interrupted by a tense confrontation between Riske-Amritraj and the chair umpire as they trailed 3-1 after already losing the first set.

The umpire had penalised the world number 41 for apologising after she thought she had hit one of her opponents with the ball.

A supervisor even had to be called onto the court in a bid to calm the situation after the umpire explained that he deemed the ball to still be in play when Riske-Amritraj apologised.

As a result, he felt that he point was still live after her apology and awarded the point to Dzalamidze and Panova, to the frustration of Riske-Amritraj.

Who will win this year's Australian Open singles titles? Let us know in the comments section below.

The umpire replied: "If I don't see that, I cannot judge it." Riske-Amritraj then interrupted the supervisor as she continued: "What the hell’s he doing up there then? That’s (muted) ridiculous Caroline. That’s ridiculous. Is he sleeping? I wouldn’t say sorry."

She then went back and forth with the supervisor as to how the umpire had seen the point, before mockingly exclaiming: "That makes nooooo sense.

This prompted the umpire to re-join the conversation as he asked: "Why are you doing that?"

Once play resumed, Riske-Amritraj and Fruhvirtova were able to recover to win the match in three sets and set up a second round meeting with number one seeds Barbora Krejcikova and Katerina Siniakova.