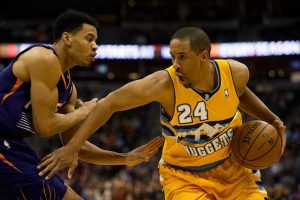 The point guard known for his “old man game” will be leading the young bucks for the Grand Rapids Gold.

The Nuggets’ G-League affiliate officially named Andre Miller its head coach for the upcoming season in what will be the 17-year NBA veteran’s first head coaching job.

Miller will be joined on the bench by associate head coach Nate Babcock, an assistant for the Gold last season, as well as former Nugget Jeff Trepagnier and James Fraschilla, the team announced.

The point guard had two stints (2003-07, 2011-14) with the Nuggets over a storied NBA career that saw him play for eight other franchises (Cleveland, L.A. Clippers, Philadelphia, Portland, Washington, Sacramento, Minnesota and San Antonio). Miller appeared in 1,304 games, averaging 12.5 points, 6.5 assists and 3.7 rebounds in 30.9 minutes per game, and led the league in assists per game (10.9) during the 2001-02 season with Cleveland.