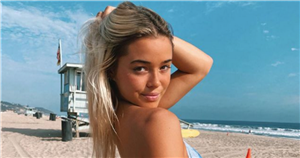 Olivia Dunne is set to become one of college sports' best paid athletes in light of the recent decision to allow students to earn money off their image and likeness through endorsement deals.

Colleges themselves are still barred from paying athletes but they are finally permitted to earn cash in other ways.

Last week, sports agency WME Sports announced that they had signed Olivia Dunne, one of the biggest young stars in the sporting arena.

A former coach at LSU described Dunne in glowing terms. D-D Breaux said of the 18-year-old: "She’s an incredible gymnast, a beautiful girl and a wonderful personality that comes across in her social media posts.

"She’s just a fabulous young woman. I could see her signing endorsements with a clothing line or a cereal company or anything. There are lots of great gymnasts, but it’s her personality on social media that sets her apart."

Dunne's potential to earn significant quantities of money are not lost on her. After the ruling was changed, she tweeted: "NIL rules change tomorrow. Let's go to work."

Dunne's large social media following combined with her undeniable talent and business savvy mean that she could be in line for a big payday.

He said: "I know of a college football player from a small school who just signed for $2.4 million. It could happen.

"Her reach as an athlete is what is impressive — five million on social media. The fact that she has that following, she can touch a lot of people. She could endorse sports drinks, gymnastics wear, other clothes."

Newsweek has predicted that she is on course to make at least a million dollars.