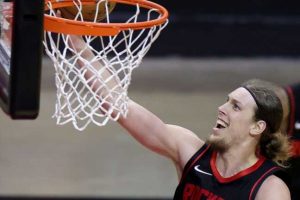 After four solid seasons with the Miami Heat, Olynyk was dealt to the Rockets last season in a deal that sent Victor Oladipo to Miami.

Olynyk, 30, exploded on a rebuilding Houston team that let him be the focus of its offense at times, averaging 19 points, 8.4 rebounds and 4.1 assists during his 27-game stint with the Rockets.

While never having reached those heights previously in his career, Olynyk has put together a solid track record of being able to contribute to winning teams during previous stops in Miami and Boston.