Home » NBA » A ‘true, true PG’: How Paul George is learning to create for others

A ‘true, true PG’: How Paul George is learning to create for others 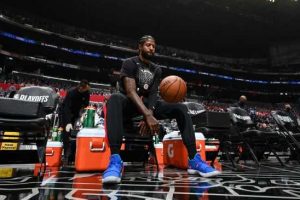 LONG BEFORE THE NBA bubble or Playoff P, before the side of the backboard shot or “All the Smoke” thrown at former coach Doc Rivers, the conversations that would reshape Paul George and the LA Clippers this season were taking place in Chauncey Billups’ man cave in Denver.

Billups was still in his first year as the team broadcaster. Tyronn Lue was Rivers’ lead assistant. And like so many Americans during the early days of the pandemic, they’d picked a group of friends to pod up with until a better understanding of when the season — and society overall — could resume.

Billups’ wife, Piper, was OK with the idea on one condition:

“I told them, ‘If y’all are going to come, I’m not putting that pressure on my wife. We’re hiring a chef,'” Billups said to the group, which included Lue’s cousin J. Carter and former Cleveland Cavaliers assistant coach Damon Jones. With the restaurant industry struggling, they hired the furloughed chef from Ocean Prime.

Basketball was the main dish on the menu, however.

“We dove into it for four or five hours a day,” Lue said. There were regular Zoom calls with Rivers and the rest of the Clippers’ staff. But the working group at Billups’ house became its own think tank. The space gave the individuals an opportunity to look at the team — and their own careers — with fresh eyes.

“All that time spent talking and studying, doing all the stuff with Ty,” Billups said. “That’s actually what really made my decision to coach.”

The Clippers were among the favorites to win the NBA title, but there was something about the offense that wasn’t feeling right. Kawhi Leonard and George were great individually, but the two superstars weren’t making each other or the rest of the team better.

There was only so much that could be changed before the season restarted in July, though. When Lue took over as head coach in October, he asked Billups to be his lead assistant and to take charge of the Clippers’ point guards.

However, the Clippers didn’t have any traditional point guards on the roster — and there wasn’t much help coming on the free-agent or trade market, either. So Lue and Billups went back to a concept they’d been talking about for months: working with George and Leonard to take on more of the playmaking duties.

“I just think with your two primary scorers, they have to be able to make guys better,” Lue said. “Those two guys can get their shot off on anybody at any time. Now, we talk about attacking the rim to make your teammates better.”

Billups has taken the lead role with George, Leonard and Reggie Jackson, watching film and talking with them throughout the game on how to see the game through the eyes of a point guard.

IT’S A DIFFERENT role for each of them. Leonard has played alongside playmakers such as Tony Parker, Manu Ginobili, Kyle Lowry and Fred VanVleet. George has played with point guards such as George Hill, Russell Westbrook and Raymond Felton.

But for the Clippers’ offense to become greater than the sum of its parts, it’s a role each has learned to embrace.