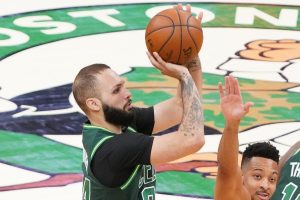 Almost a month after Boston Celtics forward Evan Fournier was diagnosed with COVID-19, he says he's playing through concussion-like symptoms lingering from having caught the virus.

"I've been feeling really weird, to be honest," Fournier said Sunday night after Boston's 129-119 loss against the Trail Blazers. "My plan was to stop talking about it so it might help me, but the thing is it's like I have a concussion. Right now, it's actually doing a little bit better, but at first, the bright lights were bothering my eyes and my vision was blurry.

"Everything was just going too fast for me. It's still the case. Some stuff is better, but at times, I'm really struggling to focus and my eyes keep struggling focusing on one thing. My depth perception is really bad right now. But I saw a specialist, and she gave me some exercises, and hopefully, it'll get better."

Fournier, 28, missed nine games while he was recovering from the virus and returned to the court April 23. He has struggled since his return, averaging just 7.3 points and 3.8 rebounds in six games.

Sunday night's loss proved to be his best performance since the diagnosis, after he scored 21 on 8 of 10 shooting and added five boards in 34 minutes, the second-highest total he has played since he got back.

"That’s the thing with COVID," Fournier said. "The truth is that doctors and everyone, they really have no idea; it’s so new. And the stuff that I’m feeling, apparently one-third of people after COVID got those symptoms as well, so it’s not an isolated case."

Fournier added that his condition is "already slightly better" but he lamented the timing of his diagnosis. Boston acquired him in a trade with the Orlando Magic on March 25 and he said he hasn't yet assimilated fully to the Celtics, in large part, because of the diagnosis.

"It’s just very unfortunate the timing of things," Fournier said. "Obviously, I’m new here, so people don’t really know my game and know who I am and it’s just terrible timing. I get here and we have expectations, trying to make a run. For the first time in my career, to have an opportunity to make a really deep run into the playoffs with a team, so it’s kind of a golden opportunity for me to finally be with a great team. And the fact that I got COVID and now I’m feeling like this, it’s heartbreaking to be honest."

The Celtics are 34-31 and currently holding onto the seventh seed in the Eastern Conference. Matters got a little more difficult for Boston, when star guards Jaylen Brown and Jayson Tatum were injured when they collided in Sunday's loss against Portland. Tatum said after the game that he "should be good," though Celtics coach Brad Stevens did not offer an update on either player.

That makes Fournier's availability even more crucial as Boston heads down the stretch before the playoffs.

"I’m going to keep working," Fournier said of his dealing with the COVID aftereffects. "But I can’t just take games off or practice off because I’m not feeling well mentally. If my body’s available, I have to be available."