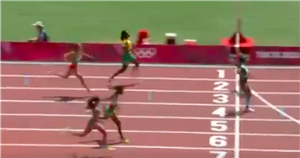 Jamaica’s 200m medal hope Shericka Jackson needlessly killed her own chances of clinching a place on the podium.

The 27-year-old’s costly blunder in the heats on Sunday is one she will surely regret for life.

Jackson was tipped to be a favourite to win a medal in the event at these Olympic Games.

And everything appeared to be going to plan for her after a strong first 150m in the heats.

But her inexplicable decision to ease off inside the final 50m and canter to the finish line cost her big time.

Jackson tried to conserve energy ahead of Monday’s semi-finals and Tuesday’s final.

In doing so, though, she failed to even qualify in late two, as Italy's Dalia Kaddari busted a gut to clinch to beat her.

The third and final automatic spot from heat five was taken by Kaddari right on the line.

She and Jackson both finished with times of 23.26.

So it was left to the finest of margins to split the pair with four one-thousandths of a second between them, as Italian Kaddari ultimately got the nod.

What do you make of Shericka Jackson's costly error? Let us know in the comments section.

Commentator Steve Cram blasted: "Shericka Jackson was almost just jogging round – what on earth? Why take such risks?

"I'm sorry to sound exasperated but I am, on her behalf, on her coach's behalf and her team-mates. It's just not necessary."

In the 100m at the Tokyo Olympics, Jackson did win bronze prior to her 200m blunder, and was part of Jamaica’s epic one-two-three triumph.

Yet she will come away from the Games feeling like she has failed now.

Jamaican duo and rivals Elaine Thompson-Herah and Shelly-Ann Fraser-Pryce are subsequently set to take each other on once more in the 200m while Jackson watches on from the sidelines.