Home » MMA » What makes Justin Gaethje the 'most violent man in the UFC'?

What makes Justin Gaethje the 'most violent man in the UFC'?

Justin Gaethje has been branded ‘the most violent man in the most violent sport’ with good reason… he wants Khabib Nurmagomedov to ‘see blood’, creates ‘car crashes’ in fights and can make it EIGHT $50,000 bonuses in a row at UFC 254

Justin Gaethje may not have any legitimate UFC gold wrapped around his waist just yet but he has a tag most MMA fighters would long for.

‘The most violent man in the most violent sport in the world’, were the words of long-time UFC colour commentator Joe Rogan after Gaethje’s KO of Edson Barboza last year.

Rogan has been cage-side to witness every rival fighter who could lay claim to that commendation and his words have stuck ever since. 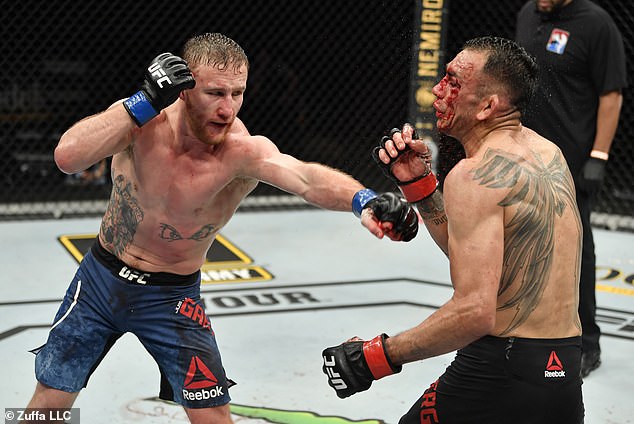 Gaethje is now regularly referred to as ‘the most violent fighter in MMA’ and his performance against Tony Ferguson earlier this summer only enhanced that reputation.

For five rounds he bludgeoned El Cucuy mercilessly, winning the the battle of skill and will in typically uncompromising fashion.

He’ll be gunning for exactly the same at UFC 254 in his lightweight title shot against Khabib Nurmagomedov on October 24 and has given an insight into the kind of gruelling scrap he seeks.

‘I think he is crazy and loves competition but he isn’t quite as crazy as me. He also hasn’t seen his blood many times, I’m sure.

‘His style of fighting is not something where you are looking for blood. I bet that doesn’t even cross his mind that he will see his own blood. That has never been a factor for him.’

Gaethje is not one for a flashy spinning heel-kick knockout or a technical move to send social media into meltdown. It is the way he relishes getting his hands dirty, the pain of a fight and the sacrifice it takes to win that chimes with fans.

There’s an honesty to his performances and pure burning desire to take everything dished out to him and come back over and over again. He has spoken many times about his ‘kill or be killed’ philosophy.

Of course he wants to beat Khabib but it is the physical challenge and confrontation that he thrives on rather than tangible rewards.

He is the only fighter in UFC history to have won either a Performance of the Night or Fight of the Night bonus for every one of his first seven match-ups for the promotion. 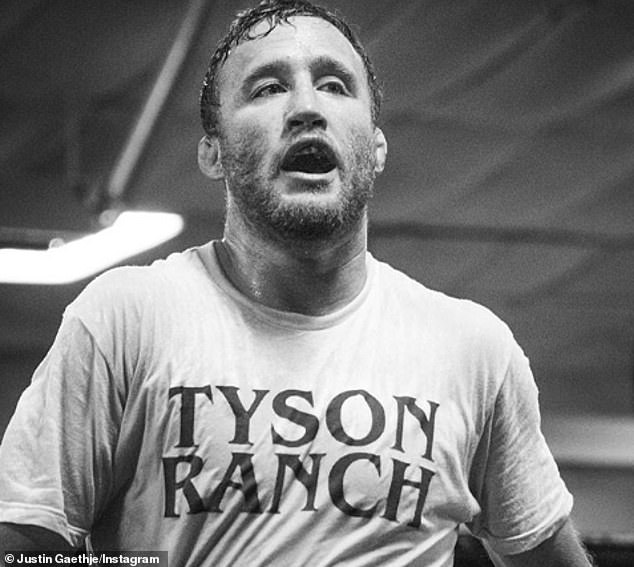 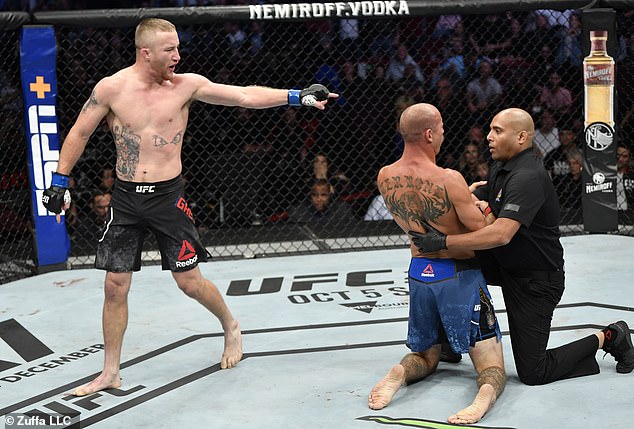 Donald Cerrone is another of Gaethje’s recent victims, losing by first round knockout

There were two defeats along the way, against Eddie Alvarez and Dustin Poirier, where Gaethje went out on his shield. Both were awarded Fight of the Night by Dana White and whenever the 31-year-old makes the walk to the octagon it has become compulsive viewing.

He’s won a fight by slamming an opponent (Kevin Croom) to the mat so aggressively that it knocked him out.

On three separate occasions, his method of victory has simply been put down in the record books as leg kicks.

Khabib has never been beaten and looked sensational in almost every fight with relentless mauling wrestling proving too much for all comers.

Gaethje presents an entirely different challenge and perhaps the Russian has never fought someone with the mentality of his challenger.

‘I win by being more aggressive and just tougher. The way I think, when I’m fighting you don’t get one minute rest, you don’t get to make a decision,’ he told Below the Belt. 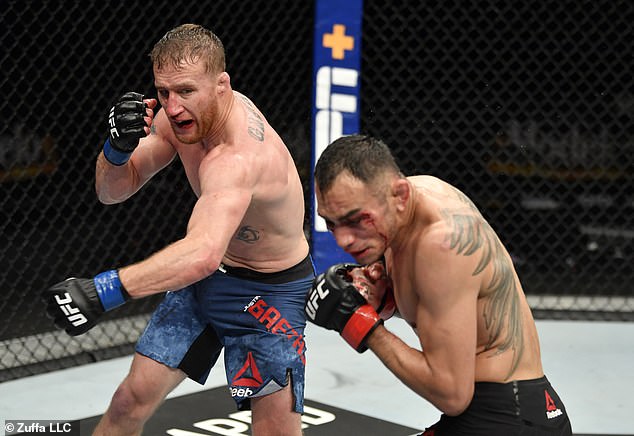 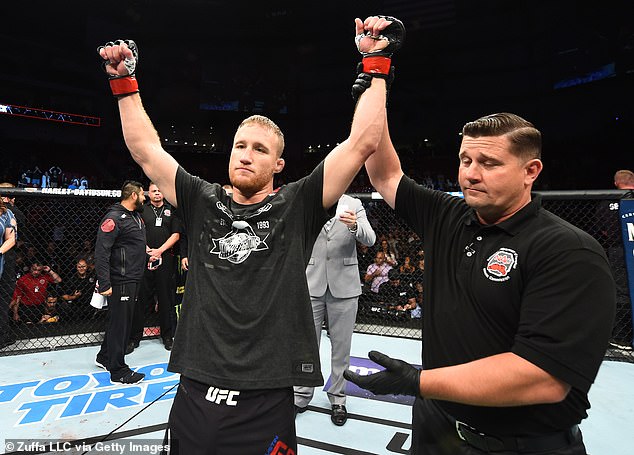 ‘I create car crashes. I want to be the object with the most mass, the most force, who gets there first.

‘I’m the last guy you want to stand across the cage from when you’re tired. It doesn’t sound the same when I hit people, I see it in their faces, even I can hear it.’

You would think the UFC’s most violent man would have a striking background but like many converted wrestlers, Gaethje fell in love with striking.

The stats support just how bruising a style the American fights with. Of all his victories (22), 86 per cent of them have come by KO or TKO and he averages 7.74 significant strikes landed per minute, absorbing 8.37 of the same.

The fact that he can be so successful while consuming more strikes than he dishes out is testament not only to sturdy chin but also ability to take punishment.

A breakdown of Gaethje’s attacks shows just how much he relies on those scything leg kicks.

In total, 60 per cent of his shots are directed at the head, 31 per cent at the legs and just nine towards the body.

He likes to immobilise his opponent by taking out their base. The Ferguson fight was a perfect example of it. There is only so much punishment calves can take and once he has someone on wobbly legs, the end usually follows. 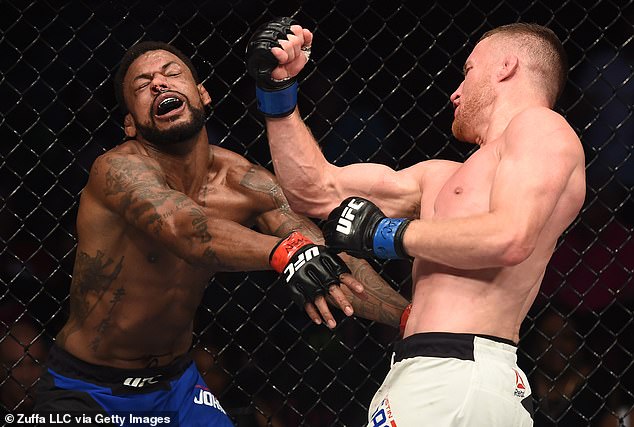 One of the fights that captured everything Gaethje is about was his UFC debut against Michael Johnson.

Both men landed sickly blows on one another and at one stage Gaethje was badly hurt, swaying wildly and struggling to stay upright. But he summoned extra reserves of energy from somewhere and marched forward to stamp his authority back on the fight.

Eventually a flying knee put Johnson up against a cage and another knee prompted the referee to step in.

First round knockouts of James Vick, Edson Barboza and Donald Cerrone set up the Ferguson fight, the best performance of Gaethje’s career to date.

If Khabib can do what Khabib always does and drags his challenger to the mat, Gaethje’s violence will be suffocated. But if he holds off the Russian, then all bets are off and the UFC’s most violent man will smell the blood he craves.