Fuelled by a burning sense of injustice at his father’s 15-year prison sentence, Kamaru Usman battled hard for recognition in the UFC… now the welterweight king is calling the shots and has Conor McGregor in his sights

For years now, Kamaru Usman has been a man nobody in the UFC’s welterweight division wanted to face.

But having won all nine of his fights in the organisation, his claim for a title showdown became undeniable and the ‘Nigerian Nightmare’ completely outclassed Tyron Woodley last year to finally reach the top of the tree.

Now he’s the one calling the shots and Conor McGregor is firmly in his sights. 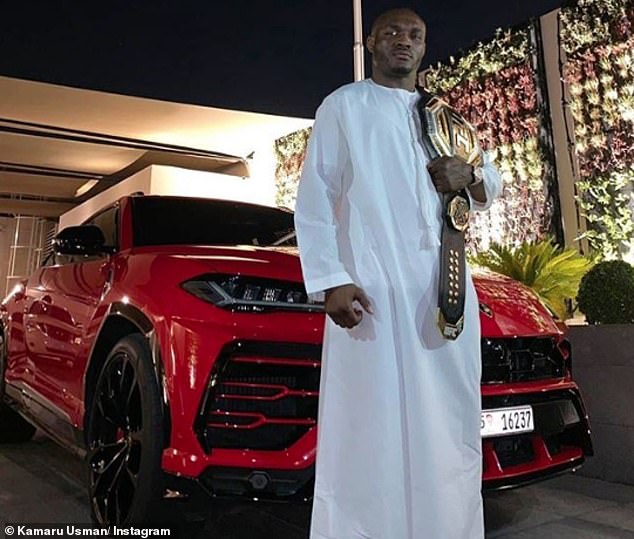 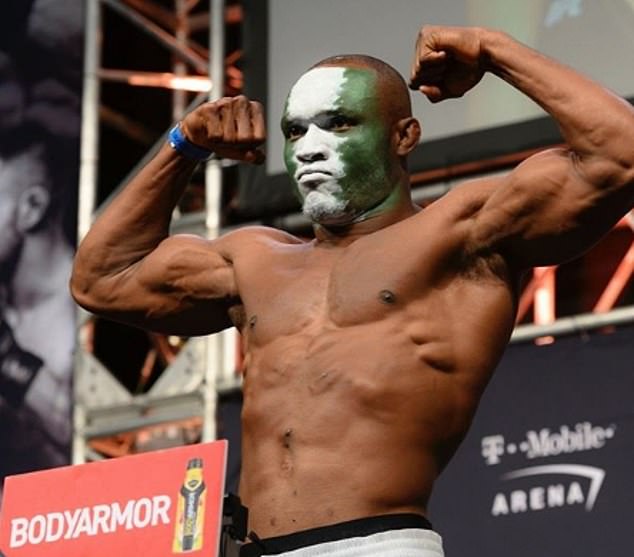 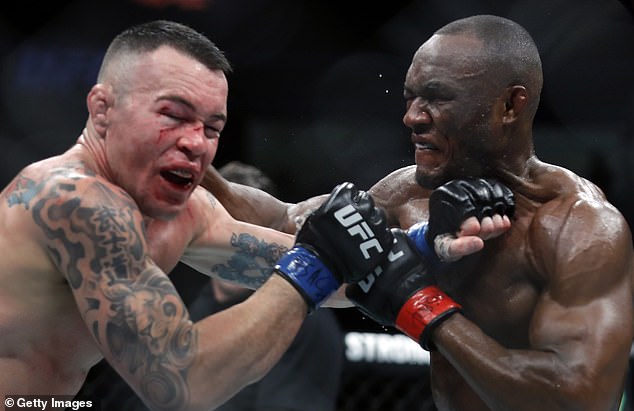 Usman’s manager, Ali Abdelaziz – who has a long and bitter history with McGregor as Khabib Nurmagomedov’s representative – teased the Irishman with the idea of a welterweight title fight on social media.

McGregor is uncharacteristically silent on the matter so far but Usman has taken the idea and run with it. He told ESPN: ‘I’m gonna give him the opportunity, if Conor wants, let’s do it. But Conor’s quiet now. Who says no to a title shot? I’ve never seen this in history, who says no when the champ says come and get your title shot?

‘Unless you know you have no chance in hell of winning. This might change the landscape of your fighting career ever. That’s the only chance I can see people saying “I’m going to pass on that title shot right there”.’

Now that the ‘Nigerian Nightmare’ has established himself as the dominant force in the 170-pound division, winning his first title defence against Colby Covington last December, he’s in the market for money fights and there is no greater payday than a clash with McGregor. 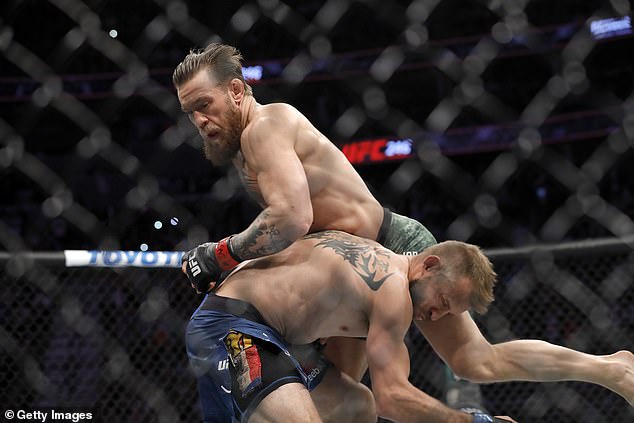 Given the 33-year-old’s seven-year winning streak and perfect record in the UFC, Usman still flies somewhat under the radar without the credit he deserves.

A fight with McGregor would bring him unparalleled limelight and now seems an apt time to look at his ascent to the top.

As deduced from his nickname, Usman was born in Nigeria and spent the first eight years of his life there before moving to the United States.

He’s since reflected on humble beginnings, recalling that the family house didn’t really have plumbing, they had to walk to a well for water and electricity was notoriously unreliable.

Usman was given a tough time at school to start with given the language barrier but worked hard and his athletic ability was obvious. He began wrestling as a 15-year-old in high school and his record by the time he graduated was formidable, 53 wins and just three defeats.

He earned an athletic scholarship to college but in 2010, Kamaru and the Usman family were dealt a devastating blow as his father Muhammad was sentenced to 15 years in prison.

Until that point, Muhammad’s move to the US had looked like the perfect story of the American dream. He founded two ambulance companies — Royal Ambulance (2003) and First Choice EMS (2005).

They proved so successful that he was awarded the Republican National Committee’s ‘Who’s Who Businessman of the Year.’

The ambulances were not used as typical emergency vehicles but transported dialysis patients to infusions and other non-emergency procedures.

Every journey would be documented on what’s known as a ‘run sheet’, which are then sent to the medical billing company for the company to be reimbursed.

Usman Snr was accused by medical companies of producing fraudulent run sheets and went to trial. He had little business experience back in Nigeria and employed others to run his company while he focused on his family and made long trips back to his homeland, according to thebodylockmma.

Two men who Usman allowed to run the business with him plead guilty and were given less than five years in prison. Usman maintained his innocence and faced charged of healthcare fraud, conspiracy to commit healthcare fraud, aiding and abetting and money laundering. He was found guilty by the jury on all counts and given a huge 15-year sentence in 2010. 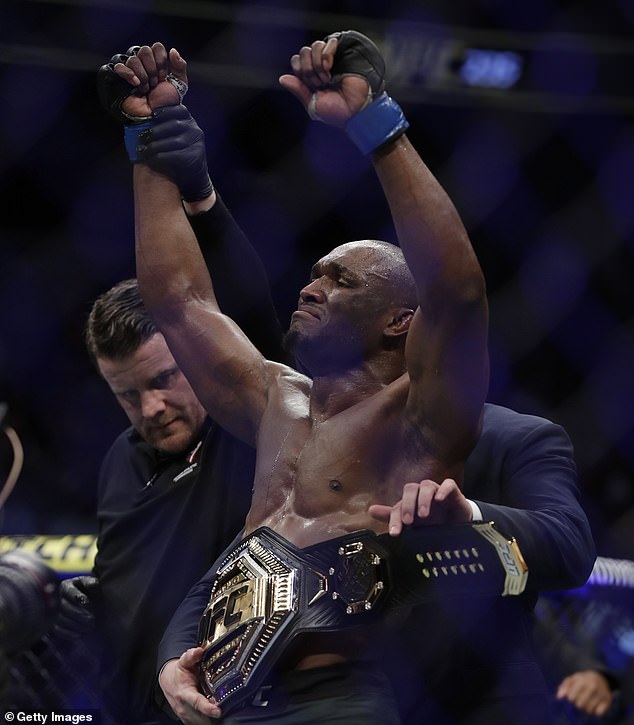 Kamaru opened up on the incarceration at length on the Joe Rogan Experience and maintains that his father’s innocence.

‘My dad is so proud of me and I’m so proud of him I mean he raised us so well. When he knows “I didn’t do anything wrong because I chose to say no I didn’t do anything wrong I’m not going to take this sentence you give me” they said “OK fine then you’ll sit in there for 15 years and there’s nothing you can do about it”…  it broke my heart man and then when I think about it I just hold it in because I don’t you know I try not to cry about it,’ he said.

Usman, who is married with a six-year-old daughter, has been fuelled throughout his career by the burning sense of injustice he carries with him.

‘Everything that I have been through, so much, I just internalised and I compete with all this energy,’ he added.

Usman had only had six professional fights when he was given the call to compete in the Ultimate Fighter, the organisation’s reality show.

He came out on top back in 2015, earned his place in the UFC and has never looked back. 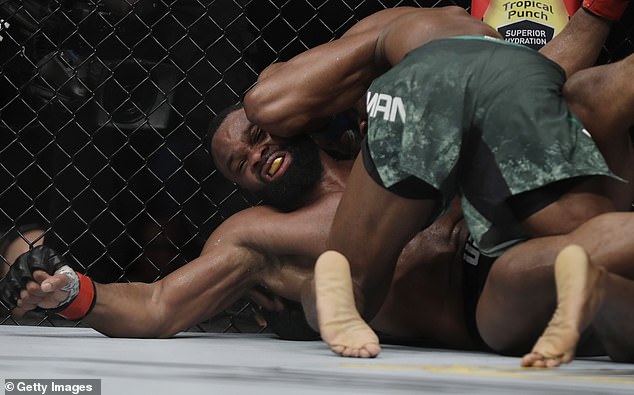 Usman’s first four fights in the UFC ended in decision victories, probably explaining why he flew under the radar for a while, never setting the world alight with highlight-reel finishes or flashy knockouts.

His collegiate wrestling background is very much the foundation of his fighting style and Usman uses his superb athleticism to grind opponents down. His style is not one that Dana White is overly keen on pushing but there comes a point when the stack of victories speak for themselves.

In fact, Usman only took home the $50,000 for ‘Fight of the Night’ honours in his last encounter, the victory over Covington.

Both men are wrestlers by trade but kept the bout standing, Usman broke his bitter rival’s jaw and ended up winning an enthralling battle by TKO, only his second knockout in the UFC.

The ground is where Usman feels most comfortable, he is an accomplished grappler and has a Brazilian jiu-jitsu black belt. The champion has had to deal with more than his fair share of injuries in his career and after winning the belt for the first time, he admitted: ‘I’ve been on one leg for years now. So to be able to open up and use my kicks will make me so much more dangerous, it wouldn’t even be fair once I start to use some of the weapons we work on.’ 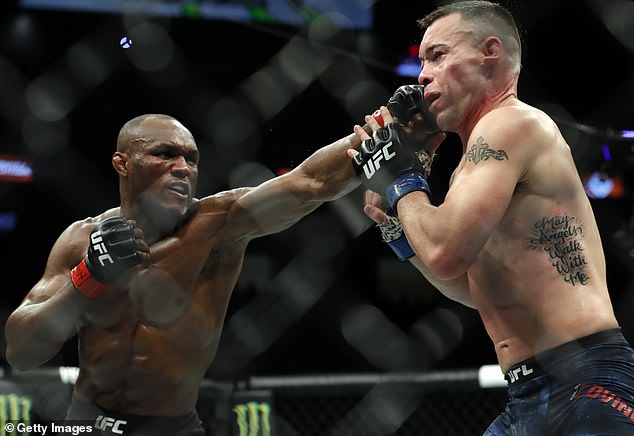 He’s had a fractured foot and a hernia prior to beating Woodley but not only did he proceed to fight the man many consider one of the best welterweights ever, but Usman beat him with ease.

If McGregor was to take up the challenge and go for a title in a third weight division, the Irishman would undoubtedly have the more polished striking game but give up a significant size advantage.

Some bookmakers have already released odds on the match-up, rating Usman as the heavy favourite.

McGregor has fought at welterweight before, twice against Nate Diaz and then in January for the 40-second destruction of Donald Cerrone. Cerrone has never been a substantial welterweight and Usman is a considerably bigger man.

McGregor came undone in his first fight with Diaz and there would be concerns that he might be biting off more than he could chew with Usman, even though he appears to have added muscle efficiently and built a stronger frame. 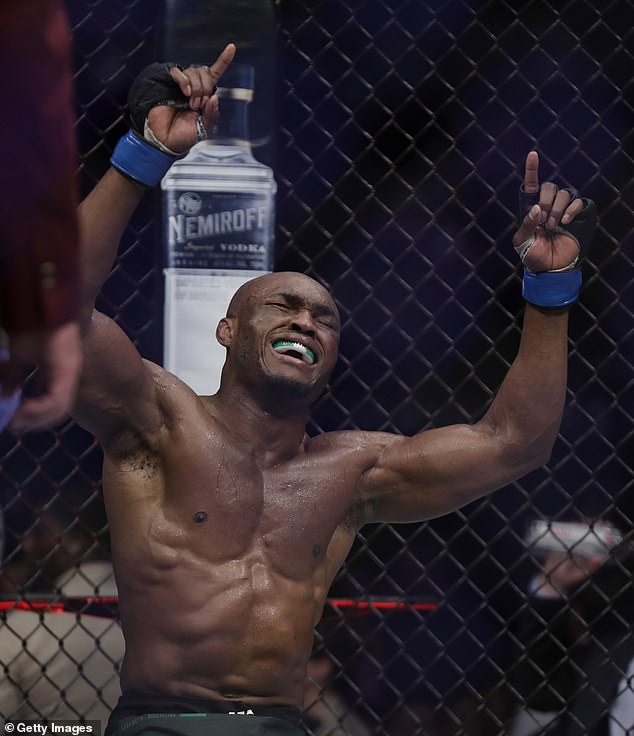 There hasn’t been a great deal of verbal jousting between McGregor and Usman in the past but the Dubliner made a dig at the welterweight’s wrestling-led approach in January.

‘Usman has the style of Khabib, the sniff-the-jockstrap style,’ he joked.

There remains so much uncertainty during the coronavirus pandemic but Usman wants to compete again in July.

If the McGregor fight cannot be made, Jorge Masvidal would be another hugely lucrative encounter and the pair had to be restrained from brawling while conducting media duties ahead of the Super Bowl this year.

For so long Usman had to fight tooth and nail to gain appreciation and convince the doubters of his talent.

It has been a long road to the top but now he’s arrived, Usman is making hay while the sun shines. 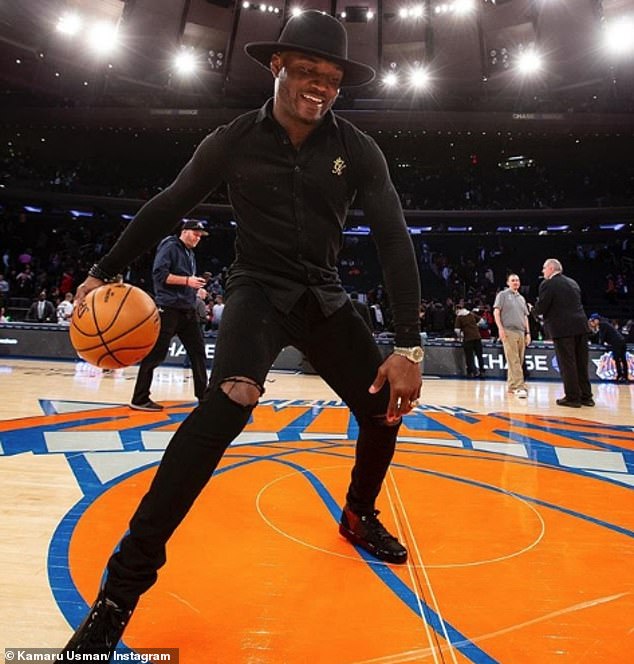