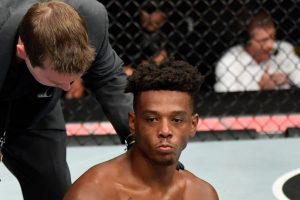 Jamahal Hill suffered a gruesome injury in a defeat to Scotland's Paul Craig at UFC 263 as the referee appeared to delay stopping the fight.

In a light-heavyweight clash, Craig claimed a TKO victory over Hill, but the winning submission manouevre ended up dislocating the American's arm.

Hill was locked in an armbar inside the first two minutes with his arm seemingly broken, but ref Al Guinee didn't notice despite both fighters bringing it to his attention.

Guinee eventually stopped it at the 1:59 mark as Craig would be awarded the victory.

But it was an insult to injury for Hill whose arm was dangling to the floor.

Is the referee to blame for not stopping the fight sooner? Comment below

It was feared that his arm was broken but his manager Brian Butler clarified that is not as bad as it initially looked as he suffered a dislocation instead.

Hill would provide an update on his health on social media after the fight and vows to come back stronger.

"Paul Craig thank you for the lesson, I will be back and stronger because of it!!! This is part of the game and I will accept it and keep moving forward!!!"

Commentators Jon Rogan and Jon Anik warned that the delay in stopping the fight could have severe consequences in the damage to Hill's arm.

Rogan said: "Oh my god, that is so nasty. It's flopping around like a rubber arm, oh my goodness."

Anik added: "Yeah, that should have been stopped way sooner, sorry. That speaks to his toughness, but when the ref sees that hanging and down and flopping all over the place, I think it's time to stop the fight."

Rogan said: "There could be all kinds of damage going on inside that arm."

Anik replied: "Oh, everything is torn in there"