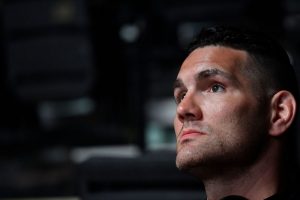 UFC star Chris Weidman admits he feared his leg would have to be amputated following a double break at UFC 261.

The former middleweight champion broke his right tibia and fibula during his bout with Uriah Hall.

Weidman had to be taken out of the octagon on a stretcher before undergoing surgery where a titanium rod and four screws were inserted into his lower leg.

He has kept fans updated throughout his rehabilitation process and revealed that he genuinely feared he may lose his leg.

"I was pretty scared about this pain because I’m thinking about the worst-case scenarios," Weidman said on Instagram.

"Worst-care scenario is that the blood supply doesn’t come back to my bone and doesn’t take, which would mean possible amputation."

Weidman went on to say that he previously had concerns about an amputation ending his career when he suffered a thumb injury.

"I had that happen to my thumb after I fought Kelvin Gastelum," he explained.

"So they had to take my whole bone out and put my hip bone inside there because the (thumb) bone was just deteriorating and dying.

"So if that happened to my shin bone – my tibia or my fibula – I don’t know what would happen. Amputation, prosthetic leg, all that. So that scares me, and I'm praying and positive that's not going to happen.

"But that's just a possibility. I've spoken to a doctor about it. Tibias have the worst percentages of taking and healing properly after surgery. It's not a bad percentage, it's like five per cent. So that's scary."