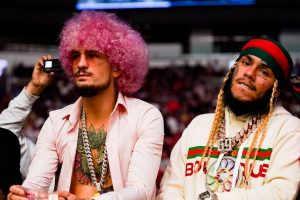 Sean O'Malley has accused Dana White of being stingy when it comes to paying fighters in the UFC, stating that he wants to be paid "what he's worth".

The bantamweight star competed in UFC 264, where Dustin Poirier defeated Conor McGregor for the second time this year, but received just a fraction of the pay package he feels he deserves.

O'Malley was paid a base amount of $60,000 (£43,000) for his victory over Thomas Almeida on a previous card in March, and thinks he and other fighters warrant more for their talents and hard work, particularly if they are contributing to exciting fights.

Speaking on his own YouTube channel, the 26-year-old said: "Why do they have a problem paying someone what they’re worth?

"Those last two fights, third-round finishes, handing out brain damage. You should be like, 'Hell yeah, I'm gonna pay you a lot. You earned it.'

At UFC 264, O'Malley's stunning knockout victory over Kris Moutinho earned him the Fight of the Night award which will have granted him some extra money- however he will have gone home with considerably less than the reported £2.2 million minimum that marquee star McGregor earned.

Initial reports suggest that O'Malley will likely have been paid around 10 percent of that figure.

O'Malley, who hails from Montana in the USA, is the latest fighter to wade into the debate around UFC fighter salaries.

Heavyweight monster Jon Jones talked earlier this year of his displeasure at the payment structure in the UFC, and is currently embroiled in a nasty row with White and the UFC that could mean one of its biggest stars never fights again.

Discussing the matter on Steve-O's Wild Ride podcast, Jones said: "I don’t want to fight soon. I have no interest in fighting in the UFC until I get paid what I believe I’m worth.”

Jones said he isn't just doing this for selfish reasons but also as he is aware of many up and coming fighters who are forced to sleep in gyms in order to train properly. The 34-year-old said: “I know so many fighters that are living in the Jackson’s MMA gym because they can’t afford their own apartment.

“So this is sad. And if I have to have a bad relationship with Dana [White], sit out for two or three years… to bring light to what’s happening then these are the things that people remember you for more than winning belts.”

Controversial YouTube star Jake Paul has also loudly criticised White and the UFC for the same reason, bragging: "In my third fight, I made more money in total pay than any fighter in UFC history.

"Maybe it’s time to pay your fighters their fair share? No wonder they all want to get into boxing."