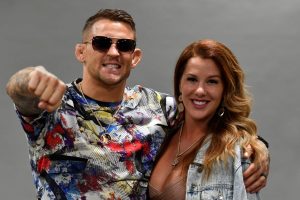 UFC president Dana White has revealed his theory regarding the message from Dustin Poirier's wife to Conor McGregor ahead of their UFC 264 clash.

Before suffering defeat at the hands of Poirier, McGregor tormented the American with screenshot images of an Instagram message request from Jolie Poirier to his personal account.

This caused further unrest and tension between the pair in the build-up to the third episode of their fight series, but White believes there is a perfectly good reason behind the screenshot that went viral ahead of the bout.

“So, there was a; I haven’t heard, but what I would assume it was is there was a huge beef between both camps over the donation to Poirier’s charity," he told Newsmax TV.

"And I’m sure the wife was reaching out about the donation for the charity.

“I assure you that’s what she (Jolie Poirier) was reaching out to.”

The war of words continued right the way until the first bell at UFC 264, where Poirier managed to force a first-round stoppage defeat against McGregor after he was unable to continue due to a broken leg which saw him require surgery.

It is also unlikely that McGregor will receive a rematch with the American, as his coach believes it is 'unnecessary' for a fourth fight to take place, as 'The Diamond' chases a shot at Charles Oliveira for the UFC lightweight championship in his next fight.

The former lightweight champion McGregor blasted his opponent after the fight, which lead to critics from across the sport including retired rival Paul Felder who believes he should not feature in the octagon again after the rant.

After the fight McGregor appeared to make reference to the alleged message again, blasting Poirier for celebrating his victory across the cage.

"Your wife is in my DMs, hey baby," he jeered as Poirier was leaving the octagon.

"Hit me back up I'll chat to you later on, I'll be at the after party at the Wynn night club. You look in bits you little h**!

Poirier's wife was spotted responding with a crude gesture, as the atmosphere got heated at the end of an explosive first round which was stopped by the referee Herb Dean.

McGregor is now set for an extended period out of action after being handed a medical suspension which could last up to a year, preventing him from taking part in any potential rumoured boxing clash with YouTube star Jake Paul.

Nate Diaz has since called out No.1 lightweight contender Poirier after his victory over McGregor, which 'The Diamond' has responded to saying he will 'touch up' the fellow former opponent of the Irishman.

Meanwhile McGregor has since claimed that he fought in the contest with multiple pre-existing 'stress fractures', that have since been rubbished by a sports doctor who claims there is 'no evidence ' that this was the case.