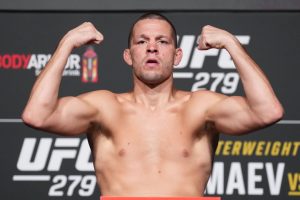 Nate Diaz’s time with the UFC is officially over. At least for now.

The longtime UFC fighter and one of the biggest stars in MMA has officially been removed from the UFC roster, promotion officials confirmed with ESPN on Tuesday. MMA Fighting was the first to report the news.

The final fight on Diaz’s UFC contract was against Tony Ferguson at UFC 279 on Sept. 10. But the UFC still had an exclusive negotiating window with Diaz, which is now over, according to Diaz’s representative Zach Rosenfield. Diaz’s team will begin discussions about future fights “immediately,” Rosenfield said.

“We are now going to begin the process of Nate’s free agency,” Rosenfield said.

Diaz, 37, beat Ferguson via fourth-round submission at UFC 279, leaving the UFC on a high note. The Stockton, California native has been involved in some of the biggest fights the promotion has put on in recent years, including a pair of bouts with Conor McGregor and contest for the mythical BMF title against Jorge Masvidal.

Diaz had been with the UFC since the fifth season of The Ultimate Fighter reality show in 2007. He told ESPN in an interview over the summer that he does want to return to the UFC eventually, but right now he’s going to seek opportunities outside of the promotion, potentially in boxing. Diaz also recently started up his own promotional entity, Real Fight Inc., and plans to promote himself in subsequent bouts.

“The coolest thing is a motherf—er who can do whatever the f— he wants,” Diaz told ESPN in August.