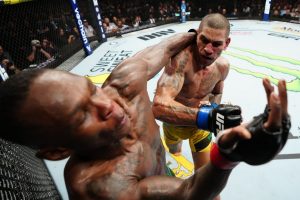 Adesanya hurt Pereira at the end of Round 1 and then dominated the ground game in the third before Pereira took over in the final round, forcing referee Marc Goddard to stop the fight after landing a flurry of punches on Adesanya.

So, now what? Is a rematch in play? What other options does Pereira have?

In the co-main event, Zhang Weili regained the women’s strawweight title with a second-round submission of Carla Esparza. Is it fair to ask for a trilogy fight against Rose Namajunas next?

Dustin Poirier and Michael Chandler put on a fight to remember, with Poirier stopping Chandler in Round 3 with a rear-naked choke of their bloody lightweight bout. Should a title fight be next for Poirier? How about Chandler? Where does he go from here?

Earlier on the card, Chris Gutierrez sent Frankie Edgar to retirement with a first-round TKO victory and made a case for himself to face a big name in the bantamweight rankings.

Dan Hooker was only 1-4 entering the fight, but his second-round TKO victory over Claudio Puelles put him back into the conversation for a bigger fight early next year. Same for flyweight Erin Blanchfield after dominating Molly McCann. A fight against Maycee Barber could be a must-see if they fight next.

Brett Okamoto shares his thoughts on what fights could be ahead in 2023 for some of the stars at UFC 281.

Who should be next: rematch

I’m calling it the second fight between these two, not the fourth. They fought in kickboxing, a different sport, and they were just two totally different versions of themselves. They’ve both matured so much from those fights. In terms of their rivalry, this was the best chapter and the most complete versions of themselves. They have to run it back. Adesanya had essentially cleaned out the division before this, and he’s deserving of an immediate rematch. Seems obvious.

If Whittaker beats Paulo Costa at UFC 284 on Feb. 11, I could see the shot going to him. I’d have to see what Adesanya wants to do — when he wants to fight next. And what the UFC wants to do. I’d include Costa in this looking ahead, but he’s made it pretty clear he’s leaving the UFC, win or lose, after Whittaker. If he wants to rethink that, he’d be in this mix. I’m sure though Whittaker watched some of the wrestling exchanges of this fight and was licking his lips.

Who should be next: Rose Namajunas

It feels like we’re recycling the same title fights in this division, but the circumstances have called for it. And for the most part, the fights have been incredibly well-matched. This has been an entertaining division in recent years. It doesn’t feel right to ask Zhang to go straight into a title defense against a woman she has fought twice (and lost to twice) in the last 1.5 years, but if we’re stating facts, it’s the correct fight to make. Namajunas lost the title to Esparza in a bizarre fight that could have gone either way. Namajunas-Zhang 2 was close, so a trilogy bout makes sense for just about every reason you can think of.

If the UFC (or Zhang) really wants to do something different, Lemos is a strong option. She has one-punch knockout power and is coming off a win in a UFC Fight Night main event against Marina Rodriguez, an opponent who had built up a lot of momentum before the fight.

Who should be next: winner of Islam Makhachev vs. Alexander Volkanovski on Feb. 11

This felt obvious coming into the week, for me — that if Poirier won, his next move would be a title shot. Why wouldn’t it be? He was the No. 2 ranked contender in the division coming into this matchup, behind only Charles Oliveira, who just lost to Makhachev. He’s still a name, less than a calendar year removed from beating Conor McGregor — twice. And this performance against Chandler will only raise his stock. Poirier deserves the opportunity and matches up fine with either option. It gets tricky if Volkanovski wins, because Volkanovski would likely go back down to 145 pounds to defend his featherweight title, but Makhachev vs. Poirier is a fine title fight.

The UFC has been looking at Fiziev vs. Justin Gaethje, but if that doesn’t come together, Fiziev vs. Poirier is a terrific fight. On its surface, it’s hard to see why Poirier would take this fight. It’s essentially all risk. But Poirier is a madman who likes to fight frequently. He doesn’t like extended time off. If he’s down for it, it’s a good one.

Who should be next: Conor McGregor

How many times have we brought this up? Chandler has fought in the UFC five times, and we’ve said it all five times. Chandler is on a shortlist for the most entertaining fighters in MMA. He is all gas, from the first bell. He knows how to build a fight. Chandler vs. McGregor, it’s a perfect fight. Exactly when McGregor will ever fight again, if ever, we never know. But once again, Chandler is coming off a situation where he’ll probably need some time off after taking damage on Saturday. There’s no Nate Diaz in the UFC (at least at the moment) for McGregor to come back to. McGregor vs. Chandler sells, but again, we’ve said that before.

Chandler needs some pieces to reset before we know what’s next for him. Unfortunately, that’s sometimes the case when you’re a big name, but not stringing together enough wins. If he does want to come back more timely, he might have to fight down the rankings. A rising contender in need of a higher-ranked fight.

Who should be next: Pedro Munhoz

This was Frankie Edgar’s last fight and in those situations, sometimes the winner gets credit and sometimes they don’t. Sometimes we chalk up the win to their opponent having one foot out the door. In this case, it’s both. Everyone would agree it was probably the right time for Edgar to end his legendary career, but most would agree Gutierrez looked impressive with his performance. He’s a growing force in this division. It’s time to book him against a name in the rankings, who needs to defend his spot. And that’s Munhoz. That was basically the situation Munhoz was in for his last fight against Sean O’Malley, and that ended in a no-contest. So, book him a similar fight.

If you want to have some fun, we could do two more intriguing rising contenders and strikers at bantamweight against one another. And you know what? You could make this a main event. These two aren’t of the usual name value you’d see in a main event, but sometimes the UFC can decide to tell people what to care about, and giving these two that kind of promotional rub might be a brilliant thing.

Who should be next: Jalin Turner

Hooker wants to fight at UFC 284 in Australia, and you know the UFC will oblige. Expect him on that card, in a big spot. He’s very popular in the region and will be on the main card. If you’re the UFC, you want to use that attention wisely and pair Hooker in a fun fight where the UFC will benefit however it goes. That’s what makes Turner perfect. If Turner wins, he’s a surging contender who is adding a big name to his resume. If Hooker wins, it’ll likely be in a fun fight, and re-solidify him as a serious name at 155. Turner has won five contests in a row, and wouldn’t you know it, his last one was against Hooker’s teammate, Brad Riddell.

Moicano also gave a great performance on Saturday, which also happened to come at Riddell’s expense. Moicano isn’t ranked and Hooker deserves that, but honestly, the number isn’t important for Hooker’s fight now. A quality fight that people want to see should be the goal. And this would qualify.

Who should be next: Maycee Barber

No exaggeration, Blanchfield just became ‘Must Watch’ with this win. It’s not just that she beat McCann, or even that she dominated her — it was just the clear, evident skill she showed in doing so. Everything from the level change on the takedown, positional advancement, control, and composure, Blanchfield’s skill set is scary. And she’s only 23.

In some ways, she is who we thought Barber would be, and still can be. Barber is also a super talent at a very young age. I don’t like the idea of pairing them early in their careers, but the storyline is great and would build the winner. Barber said she was at the end of her UFC contract in July, so we’ll need clarity on that. But this could be the one.

To be frank, this is a style matchup that would probably favor Blanchfield on paper. But it would test her against someone with dangerous striking and a lot of experience. And also, the rankings say this one makes perfect sense. Lee is No. 9 at the moment.