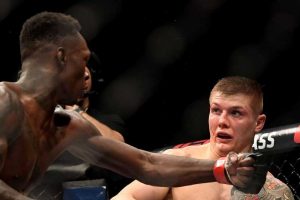 Israel Adesanya will defend his UFC middleweight title against Marvin Vettori — the first opponent to go the distance with him — at UFC 263 at Gila River Arena in Glendale, Ariz., on Saturday.

Adesanya and Vettori met in 2018 when they were both relative newcomers to the MMA promotion. Adesanya was widely recognized as a knockout artist but Vettori managed to go the distance and lost by a narrow split decision that he still contests to this day. Since that fight, Adesanya has gone on to win the 185-pound title and returned to the division after being unable to defeat Jan Blachowicz for the light heavyweight title last March. Adesanya aims to remain undefeated in the division and turn back an incensed Vettori.

Vettori has won five in a row since losing to Adesanya. He has dominated opponents with his wrestling, leading to four unanimous decisions and a submission victory. He aims to again use his takedowns to neutralize Adesanya’s striking and plans on peeling the title off of his rival.

Here are the betting odds to help you with your selection.

All odds courtesy of FanDuel.

A lot has changed since Adesanya and Vettori last met. Aside from becoming middleweight champion, Adesanya has nearly cleaned out the 185-pound division with victories over Paulo Costa, Yoel Romero, Robert Whittaker, Kelvin Gastelum and Anderson Silva. He remains arguably the best pure striker in the UFC and has demonstrated significant improvement in his takedown defense. After being put on his back twice against Vettori, Adesanya has only been taken down twice, total, in seven middleweight bouts. Adesanya’s ability to control distance and find a comfortable striking range has also improved since the two last met.

But Vettori’s confidence has grown with his last five victories. They have all been relatively dominant with his top control and takedowns being among the best in the division. He has also been impressive on defense and has demonstrated a rock-solid chin. He’s not a knockout artist by any means but is a serviceable striker.

His margin for error is relatively small against Adesanya; he’ll have to find his way inside without getting clipped. It’s just as unlikely that Adesanya would score a submission as it is that Vettori would knock out the champion. Neither have ever been finished in their professional MMA careers but Adesanya is phenomenal at setting traps for overzealous opponents, as evidenced by his stoppages of Whittaker and Costa. But given Vettori’s durability and the likelihood that he’ll be in pursuit of a takedown from the opening bell, it feels safer and more valuable to bet on Adesanya to win by decision at +155 rather than bet him straight up at -280.

That value does come at a risk because Adesanya is a phenomenal finisher who creates opportunities to end a fight at any given moment. And if Vettori is foolish enough to stand in front of him for an extended period of time, he could find himself suffering the first knockout loss of his career.

Ultimately, Adesanya is too skilled in his striking to lose to Vettori, and as long as he continues to show improved takedown defense, he should outpoint his opponent and retain his title.