UFC 263: Congratulations pour in for Brandon Moreno after his flyweight title win over Deiveison Figueiredo 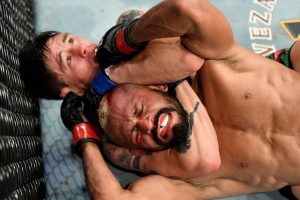 The energy and noise levels inside the Gila River Arena in Glendale, Arizona, at UFC 263 were incredible following the fight between Leon Edwards and Nate Diaz, and only grew during the early moments of the flyweight championship fight between Deiveison Figueiredo and Bradon Moreno.

After their first fight ended in a draw, Moreno left no doubt in the rematch. He grabbed the advantage in the first two rounds, and then locked Figueiredo in a rear-naked choke and forced the champion to tap out.

As Moreno celebrated making history as the first Mexican-born UFC champion, praise from throughout the UFC roster began to pour in on social media.