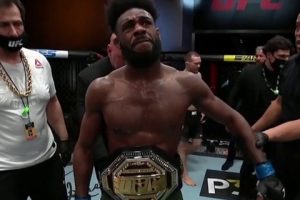 In one of the biggest brain fades in UFC championship fight history, Petr Yan has been disqualified from his bantamweight title fight against Aljamain Sterling at UFC 259 after throwing an illegal knee.

Yan drove his right knee directly into Sterling’s face, but the challenger was downed at the time.

Sterling tried to regain his composure and his feet for over three minutes, but referee Marc Smith had no other option but to disqualify Yan and anoint Sterling the new 135-pound champion.

Yan was in complete control of the fight at the time of the foul and was seemingly on track to defending the belt successfully for the first time.

UFC president Dana White placed the belt around Sterling’s waist, but the emotional Aljo took it off and left it in the Octagon.

“Everything I worked for to this point, to have the fight go like that,” he said through tears.

“I thought it was close, I thought I was down two rounds. That’s not the way I wanted to win. That’s not how I envisioned this. I took the belt off. I was in bad shape and it would’ve been ego making me fight on.

“I wanted to continue. It was fast-paced, a lot of action. The action was non-stop until that bulls.”

After the bout, it was revealed that Yan’s corner told him he was allowed to knee Sterling despite the challenger being grounded.

Sterling came flying out of the blocks, throwing everything in the opening minute and a half. Yan was tagged plenty and backed up under the insane pace and pressure of the challenger.

Aljo stuck the first takedown he attempted, but Yan regained his feet and quickly changed the momentum of the fight with a huge overhand right.

Sterling was stunned as he hit the canvas, and was sent back down from a vicious low kick seconds later.

It was just as intense in the second, with Sterling pushing hard for a takedown. Aljo looked smooth and relaxed in the early stages of the first round, but was putting more effort into every move in the second and third.

Meanwhile, Yan was as patient and calculated as ever, and began taking more control in the third.

Just as it was beginning to seem like a formality, Yan uncorked a brutal illegal knee to Sterling’s head. Sterling was grounded at the time, with Yan driving his knee straight into his head.

Sterling was dazed and remained on his back for well over three minutes.

“For his own health and safety, this should be called,” Rogan said.

“Aljamain’s a tough guy. If he could get up, he would get up. This should be called. Call this fight.”

Smith was left with no other choice but to call the fight off, awarding Sterling a win by disqualification.