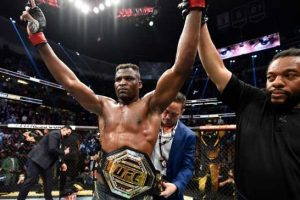 The connection between Francis Ngannou and Ciryl Gane ran deep, even ahead of UFC 270’s main event at the Honda Center in Anaheim, California on Saturday night. This is the fourth time in history that the heavyweight champion had to defend his claim as the rightful titleholder.

ESPN’s two top-ranked heavyweight fighters shared a coach in Fernand Lopez at the MMA Factory. The facility, based in Paris, was founded in 2012 by Lopez. The team guided Ngannou to the UFC in 2015, but the Cameroonian fighter moved to Las Vegas due to a falling out between him and Lopez.

Gane, who entered the fight as interim champion and became the gym’s top heavyweight after Ngannou’s departure, said he once viewed his role as “the revenge.”

Former light heavyweight champion Jon Jones, who could face the undisputed champ later this year, weighed in on Ngannou.

Clint Capela and Teddy Atlas were among those who shared their thoughts about the title fight on social media.