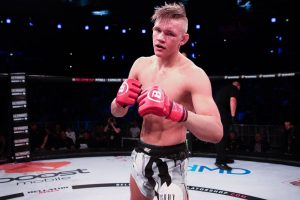 Bellator star Oliver Enkamp will chase a ranked fight in the welterweight division once he gets past Kyle Crutchmer this weekend.

The Swedish MMA fighter has been on a three-fight winning streak since joining the promotion after a couple of UFC fights in 2019.

And he's earned himself the number 10 spot in one of MMA's most crowded divisions, with many feeling he could be facing a ranked opponent already.

But he has insisted that he's happy to fight renowned wrestler Crutchmer in what will be a fascinating stylistic test at Bellator 272 tomorrow night.

"Fighting against a specialist like that, it's obviously no secret what his tactics will be.

"But it's going to be fun to try out my skillset against that type of fighter because I've never done that before."

Enkamp understands why fans are anxious to see him face one of the top 10 in the division, but he is happy to make his American debut against an opponent with a big name.

Crutchmer is a two-time All American wrestler at NCAA Division I level, and is far and away the strongest grappler Enkamp has faced.

But he feels the American hasn't yet faced anyone as good off his back as the Swede, and will be able to submit or knockout the wrestler.

"Everybody says I should be fighting someone in the rankings," Enkamp continued.

"But to me it's not really important as long as it's a big name with a big following and to me Kyle is just that.

"He has this long list of accomplishments in wrestling so he has a lot of eyes on him and they'll be on me when we fight.

"I think it's a good match-up and striker vs wrestler match-ups are always fun for fans to watch.

"In that regard I think this will be a very fun fight for anyone to watch."

Enkamp's brother Jesse is a karate expert and YouTube star in Sweden with over 800,000 subscribers across his social media platforms.

And the pair will join up with UFC star Stephen 'Wonderboy' Thompson to film some videos after Oliver has got the job done against Critchmer.

Will Oliver Enkamp continue his winning run in the Bellator cage this weekend? Let us know in the comments section!

"We're going to meet up with some American martial arts YouTubers this weekend and shoot some videos," he revealed.

But before that, he'll need to take care of business in his first American fight at the Mohegan Sun Arena.

He won't predict the result, but as with everything in the Swede's career thus far, he has taken a pragmatic approach when telling fans how the fight will play out.

"I don't like to make predictions, but I can tell you the statistics," Enkamp said.

"In the first fight with Bellator, I submitted a striker, then I knocked out a grappler, submitted another striker and now I fight another grappler, you can do the maths."

Watch Oliver Enkamp in action at Bellator 272: Pettis vs. Horiguchi live on BBC iPlayer from midnight on Friday.