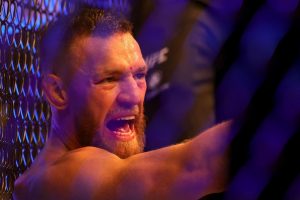 New footage has emerged of Conor McGregor revealing his post-fight injuries to Dana White moments after the Irishman broke his leg against Dustin Poirier at UFC 264.

McGregor suffered a broken tibia in the closing moments of the first round in his trilogy fight with Poirier last month.

Footage from UFC 264's 'The Thrill & The Agony' shows McGregor talking with White in the octagon after breaking his leg.

"I been dealing with it the whole camp," McGregor told White.

"I had been dealing with it the whole camp. I didn't think nothing was going to happen, though. I had him there, I tell ya."

McGregor claimed he had pre-existing stress fractures in his left ankle long before his trilogy with Poirier. This was disputed by top sports doctor David Abassi.

"We were debating pulling out because I was sparring with no shinpads and kicked a knee a few times, so I had multiple stress fractures in the leg. And then I had trouble with the ankle anyway over the years from fighting all the time.

"I was wrapping my ankle every training session. Even when it was sore, I wouldn't stop training."

UFC president White went on to say that McGregor had been suffering from chronic arthritis in his ankles whilst preparing for the fight.

The Irishman is set to be sidelined for a year to recover from his leg break. He had a titanium rod fitted in his left leg following the fight.

And of his injury, White told Pat McAfee: "As far as I'm concerned, Conor is out for a year. The doctor said it will be nine months before he starts training again, we're looking at it as a year. I'm not even thinking about it."

How will McGregor recover from his injury? Comment below

Meanwhile, Poirier is set to fight for the UFC lightweight title against current champion Charles Oliveira next. 'The Diamond' has also teased a fight with Nate Diaz after calling him out on social media earlier this week.

Since his loss to Poirier, McGregor has come under heavy criticism for lashing out at former fighters such as Khabib Nurmagomedov and Daniel Cormier on social media.

He seemingly mocked the death of Khabib's late father and coach, Abdulmanap, when he tweeted: "Covid is good and father is evil?"

McGregor also slated Cormier for his commentary skills at UFC 264 and labelled him as a "fat drunk f***". The Irishman said it was a "sackable offense" for Cormier to be drunk for his media appearance after the UFC 264 weigh-ins.