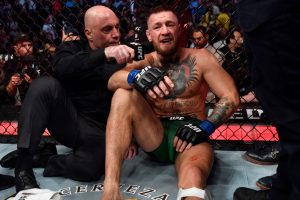 McGregor suffered a broken tibia in the final moments of the opening round when he was defeated by Poirier in their trilogy fight earlier this month.

But what really captured fans attention was the Irishman's actions towards Poirier after the fight.

McGregor, who is known for his brash antics, mocked Poirier's wife in the octagon and subsequently directed tweets aimed at Poirier and his four year old child.

"He’s going after kids now. If that was anybody else, if that was a guy on a prelim card, we would all be like, "Kick this guy off the roster, kick this guy out of the UFC," but because it’s Conor McGregor, you can’t say that," Zahabi said on the Tristar YouTube channel.

"If [McGregor] has a single true friend in this world, that true friend is going to take him behind closed doors and tell him, 'Look, the way you’re behaving, it’s stupid,'"

"'You’re making yourself look bad. You’re embarrassing us, your family, your friends.' It’s just a humiliating way for a true martial artist, a warrior, to behave."

UFC president Dana White was also not a fan of McGregor's trash talk, stating that fighters should "leave people’s families and wives" out of it.

Zahabi, who is known for being the head coach of former UFC champion Georges St-Pierre, struggles to see how McGregor still has the support of fans after his disrespectful comments.

"I was really grossed out. I don’t know how you guys can be fans of this man. I respect him as a fighter. I respect his skills, I can’t deny that, but the way he behaved at the press conference was just horrible.

"It’s Conor McGregor, he’s the poster boy, he’s the one who sells all the tickets. No. There’s no pass for that.

McGregor is likely to be sidelined for a year following his leg injury. Meanwhile, Poirier will probably receive the next lightweight title shot against current champion Charles Oliveira.

And Zahabi continued by saying: "That’s just animal behaviour. Then to say what he said about Poirier’s wife? It’s disgusting.