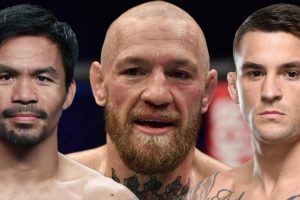 Manny Pacquiao has partnered with Dustin Poirier to support "the most bullied group of people in the world" – in the same week it was revealed Conor McGregor has yet to follow through with his promised $500,000 donation.

Pacquiao and Poirier have each donated $50,000 to aid and, water, food, and housing initiatives for the Batwa Pygmies in Uganda.

The $100,000 will be used to build 32 two-bedroom homes for the Pygmies on land secured by Poirier's foundation two years ago.

"I started my foundation to tackle food insecurity and health care issues in my hometown in Louisiana," Poirier said. "To think that today we’re addressing the same issues in Uganda is like a dream come true."

Pacquiao added: "I have had a strong desire to touch more people in need, in more countries, in more ways.

"Working with Fight for the Forgotten is the right opportunity at the right time, and I’m so happy to be a part of it."

According to humanitarian and former mixed martial artist Justin Wren, Batwa Pygmies have been systematically evicted from their homes in the forest without the skills and tools to adapt to modern life.

"With Manny and Dustin walking alongside, we’re keeping all our promises to the Batwa, and beginning work with other Pygmy tribes as well. That's what I call ‘going far.'"

Earlier this week, Poirier revealed McGregor had failed to deliver on his promised donation.

The Irishman had vowed to help his rival's foundation build a new gym but has yet to release the funds, claiming he first wants to know exactly how the money will be spent.

The pair took their row to social media with McGregor threatening to pull out of their trilogy fight.

In the end he relented and signed his contract for the bout which will be held in Las Vegas on July 10, four months after Poirier stopped McGregor in their rematch.

The winner of the third fight will likely be first in line to challenge the winner of Michael Chandler's clash with Charles Oliveira which will determine the next lightweight champion.