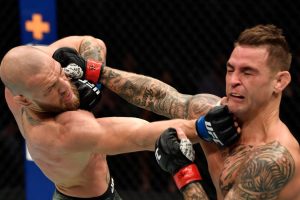 The retired Russian earned wins over both McGregor and Poirier during his legendary career and knows the strengths and weaknesses in their games.

And while talking about the state of the lightweight division in a recent interview, Khabib made a prediction for the future of the weight class that appeared to include his expected winner for the trilogy fight between Poirier and McGregor this summer.

"When Islam Makhachev rises in the rankings, Oliveira will no longer be champion,” Khabib told Sport 24 .

“The main thing is that Oliveira should understand my words correctly. I respect him, he is a worthy champion. But when Islam will go up, there will be another champion within the year.

"In my eyes it will be Dustin Poirier.”

Poirier will need a repeat of his stunning performance from January this year if he is to beat the Irishman in their third bout, as they both hold a win over one another.

Back in 2014 at UFC 179 in Las Vegas, McGregor made light work of Poirier in the first couple of minutes when they fought at featherweight, knocking him out to continue his impressive initial winning streak in the promotion.

And with both men going on to become champions and rack up some impressive wins, as well as some devastating losses, they met again at UFC 257 in January.

Poirier was the victor in Abu Dhabi, after a close first round that could have been scored to either man he utilized his leg kick offence to weaken McGregor's guard before knocking him out in the second.

The pair will have their third fight on July 10 in the T-Mobile Arena in Las Vegas, where there will be a capacity crowd of 20,000 fans for the first time since the beginning of the coronavirus pandemic.

Nurmagomedov was commenting on the newly crowned lightweight world champion Oliveira in the Sport 24 interview, saying that he was happy that the Brazilian defeated Michael Chandler for the belt last month.

"I think Oliveira is a very worthy champion," he continued. "He has many finishes, many records in the UFC, and it would be a shame if Michael Chandler won.

"Two fights in the UFC and already a champion? That would somehow be wrong.

“And Charles Oliveira has progressed very much. This is a worthy champion. I’m glad for him.”

The former champ retired in October of last year after defeating Justin Gaethje in his final lightweight title defence on the UFC's 'Fight Island' in Abu Dhabi.

Nurmagomedov said at the time that he could not continue fighting without his father Abdulmanap, who had passed away earlier in the year, and had promised his mother he would step away from UFC.

While Dana White made multiple attempts to lure him back, and Floyd Mayweather offered him $100million for a boxing match, he has maintained that he is retired from combat sports.