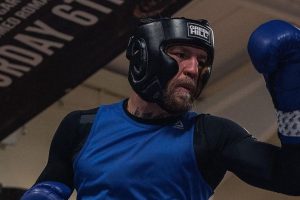 Khabib Nurmagomedov resisted the urge to pile in on Conor McGregor after his defeat by Dustin Poirier.

Rather he was more nuanced in his critique of his bitter rival's performance in his UFC 257 rematch.

"This is what happens when you change your team, leave the sparring partners who made you a champion and spar with little kids, far away from reality," he wrote.

Nurmagomedov, who remains the lightweight champion, may have a point.

As McGregor later pointed out, his coaching team has remained intact since he took up martial arts as a teenager.

He has been trained by John Kavanagh and Owen Roddy throughout his career and has added to his team incrementally.

His amateur boxing coach Phil Sutcliffe was the latest addition and was credited with improving McGregor's striking.

But the former two-weight world champion has placed a growing emphasis on sparring with amateur and professional boxers.

Indeed, he flew several such fighters to his 10-week training camp in Portugal last year including 15-1 Dylan Moran while 11-time national champion William Hayden has also been part of the team.

Of course McGregor has a plethora of training partners in other disciplines but he has been distracted by a potential fight with Manny Pacquiao.

After losing to Poirier, McGregor went as far as to say a fight with Pacquiao was "almost done" but now looks a remote posibility.

And responding to Nurmagomedov, McGregor said: "My team has been my team since day one, I have not changed anything.

"It is what it is. Respect the athletes, that's the character of the man for sure, behind the mask… If he wants to have his disrespectful comments, come back my man."

There is little prospect of Nurmagomedov reversing his decision to retire which will likely open the door for Poirier to challenge for the vacant belt.

McGregor, meanwhile, insists he is not ready to hang up his gloves.

“I will regroup and pick myself up off the floor and go again," he said. "Styles make fights and there are many good match-ups out there for me."