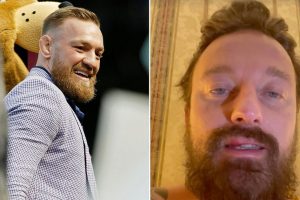 Italian DJ Francesco Facchinetti felt like he was "living in a movie" before he was allegedly assaulted by UFC star Conor McGregor.

The pair spent more than two hours together at a party in Rome on Saturday night, talking about everything from the Irishman's career to his new £2.6million Lamborghini yacht.

They even exchanged phone numbers before McGregor allegedly punched the musician, leaving him with a broken nose and split lip.

Mr. Facchinetti took to social media to make his claims over the weekend – and has now expanded on the lead-up to the alleged incident at the plush five-star St. Regis Hotel.

"I just wanted to make it clear that I am – or actually I was at this point – a great fan of McGregor, so when I was told I could go and see him I thought it would be nice to be there with him and for two-and-a-half hours it seemed like I was in a movie," he said on his YouTube channel.

"Being able to talk to McGregor… My Brazilian wife spoke to him, they spoke about Brazil, we spoke about Jose Aldo and he told us he had to fight in Brazil but then he lost against Khabib [Nurmagomedov] and no longer went there.

"He told us many cool things, it was nice, we spoke about Rome, the Colosseum… I told him he should go to Paestum, Pompeii, then he told me he would go and get his Lamborghini boat. It was a nice chat.

"After that… obviously my words are one version, then we also have to listen to his version if he wants, but I had about 10 witnesses with me, of which four were Italian."

The Daily Mirror has contacted Conor McGregor's representative and the Rome police for comment.

In a statement, a spokesperson for the hotel said: "We will offer the police our full support in their investigation.

"The safety and security of our guests and employees is always our first priority."

Mr Facchinetti continued: "Suddenly, in front of the 10 people who were there with me, in front of his bodyguards who in the meantime had also become my friends (we had also exchanged phone numbers, with his bodyguards and his Irish friends), his brain went off, he saw black and punched me.

"So he didn’t slap me, he punched me. Luckily he was very close to me, about 20-30cm, with his right hand, so not his nasty left (hand), he hit me exactly here [points to upper lip and his nose] so he didn’t hit my jaw or my cheekbone, but he hit this part… So you can see here, the lip and the nose are a bit swollen.

"I didn’t fall down, I’m not sure thanks to which strange miracle of the world I managed to remain standing."

The Dubliner is also due to pick up his new boat in the Italian capital.

He is currently recovering from the broken leg he suffered in the first round of his trilogy fight with Dustin Poirier in July.

And his alleged victim concluded his video by admitting he had been left saddened by the weekend's events.

"I am very sad about this thing, first because humanly it really bothered me, it was bad. Secondly, because I am an MMA fan, and as I said before, a McGregor fan, as he has done so much for this sport so I am really sorry about what happened," he said.

"Third, because I am trying to invest in the MMA world in Italy, I work with many fighters not just in the MMA world but also in boxing, so it annoys me that in some way the fighting world could be associated with the bully world.