Home » MMA » Is Stipe Miocic the most accomplished underdog in UFC history?

Is Stipe Miocic the most accomplished underdog in UFC history? 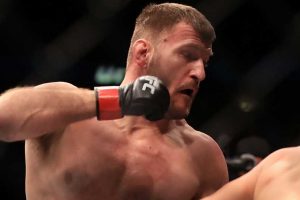 No matter what Stipe Miocic accomplishes in his UFC career, he is always working to prove people wrong.

It sounds ridiculous considering that he’s the current heavyweight champion who holds the record for most defenses of that title in UFC history at four. However, despite his excellent run and 20-3 record, he’s been the underdog in seven of his 17 UFC fights. As a matter of fact, he’s been favored to win only once in his past five fights. Interestingly enough, that was the first meeting with Daniel Cormier, which Miocic lost by knockout.

And although Miocic already owns a dominant unanimous decision victory over Francis Ngannou, the champion will enter the Octagon as the underdog once again at UFC 260. To take things a step further, it’s almost a certainty that if Miocic defeats Ngannou and faces Jon Jones in the former light heavyweight champion’s debut as a heavyweight, Miocic will once again be the underdog.

It’s absurd, but there is a method to the madness.

You see, Miocic is as far away from being a flash and flare fighter as there is and is the epitome of a blue-collar worker. Although he’s the heavyweight champion, Miocic maintains his day job as a firefighter in Ohio, which isn’t necessarily the trait of a superstar heavyweight champion in the biggest mixed martial arts promotion in the world.

He doesn’t talk a lot, nor does he go out of his way to be a celebrity. If you see him in person, he’s bigger than your average human but there’s nothing particularly imposing about him. He just gets the job done.

He didn’t come into the UFC with a ton of fanfare when he debuted against Joey Beltran at UFC 136. And when he was stopped by Stefan Struve in 2012 — another fight in which he was the favorite — it felt as if Miocic was going to be a solid, yet unspectacular heavyweight. But after a “Fight of the Night” performance loss to Junior dos Santos in 2014, everything changed.

It wasn’t terribly spectacular, but each victory saw Miocic chip away at the heavyweight rankings until he found himself in a title showdown with Fabrico Werdum, who was being considered the greatest heavyweight at the time.

Miocic stopped Werdum in the first round to become heavyweight champion and strung together a pair of knockout victories against Alistair Overeem and a return bout against dos Santos before stepping into the Octagon with the indestructible force known as Ngannou.

To that point, there wasn’t a lot of weight put on Miocic’s title run. To that point, no champion had defended the heavyweight title more than twice, so the prevailing thought was that Miocic would see his reign end there and Ngannou would get his try in an absolutely volatile division.

But then Miocic dominated Ngannou and people were forced to pay attention. There were rumblings that perhaps Miocic deserved more respect as the champion. That ended unceremoniously at UFC 226 when Daniel Cormier moved up from light heavyweight and knocked Miocic out in the first round. Miocic would win the rematch and the trilogy but was an underdog in both fights. And now he’s back in the Octagon with Ngannou and once again finds himself not being appreciated by the oddsmakers despite holding a number of UFC records that include:

What does this mean?

But should Miocic defeat Ngannou again at UFC 260, it might be time to consider that Miocic should be the favorite in every fight he’s in until proven wrong. Then again, maybe it’s better for Miocic because he gets to continue to prove people wrong each and every time he steps into the Octagon. Should he beat Ngannou, rest assured that the world will see Jon Jones as the favorite in that fight.

There hasn’t been a champion as accomplished yet under the radar as Miocic. When it’s all said and done, he may be the most successful underdog in the history of MMA.