Gegard Mousasi promises he will "break" John Salter at Bellator 264 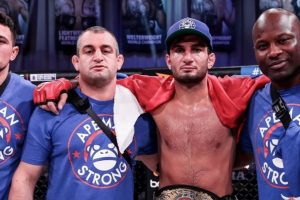 Gegard Mousasi is confident his middleweight title fight against John Salter at Bellator 264 will not be reaching the judges' scorecards.

Mousasi will face Salter in the main event of Bellator 264 this Friday, August 13. It will be his first title defence winning the vacant middleweight belt against Douglas Lima last October.

'The Dreamcatcher' had his first reign as middleweight champion in 2018, winning the title against Rafael Carvalho and defending it against Rory MacDonald. Mousasi lost the title to Rafael Lovato the following year.

Talking recently with Mirror Fighting , Mousasi is expecting the submission specialist Salter to try and grapple with him for most of the fight.

"I trained for everything, but of course a little more takedown defence as I know he is going to try to take me down. He's not going to stand up very long with me," Mousasi said.

"He's confident because he thinks that style of fighting is suitable to beat me. But I'm so confident that I'm going to break him. I don't want to just win but really win.

Mousasi has fought at middleweight for most of his career but has dabbled in the light heavyweight division on a few occasions.

He would be open to one fight in Bellator's talent packed light heavyweight division, but only to fight the winner of the grand prix tournament.

Who takes the win in the main event of Bellator 264? Comment below

"I am going to do it eventually. I think it's expected of me to go and fight the light heavyweight champion, whoever the tournament winner is. That's in the planning, but only one fight.

"There's a reason why people don't succeed very often when they go up in weight. The disadvantages are just too much."

Mousasi left the UFC for Bellator in 2017, fighting 12 times for the promotion and going 9-3 during that run.

Since his departure, some of the biggest stars in the UFC such as Francis Ngannou and Jon Jones have been campaigning for better pay. Mousasi believes fighters like Jones deserve the amount of money they are asking for.

"It's not fair as it's not 50-50. If Jon Jones is asking for $20 million I think he deserves it to fight Ngannou, who is a monster. The UFC is still going to make money but they just don't want to pay, it's as simple as that."