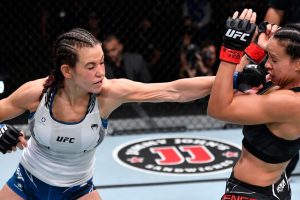 Tate (19-7) looked spectacular in her return from retirement in July, when she dominated Marion Reneau. It was Tate’s first appearance since 2016. This figures to be a tougher test, however, as Vieira (11-2) is 5-2 in the UFC and in the prime of her career. Vieira is No. 8 in the ESPN women’s bantamweight rankings.

Who has the edge in this 135-pound matchup? ESPN asked several experts for their breakdowns and predictions.