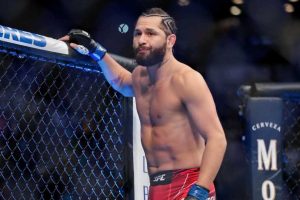 As a competitor, Jorge Masvidal wasn’t all that excited about being dropped by a vicious Kamaru Usman punch at Saturday’s UFC 261 pay-per-view event. But as an MMA fan, he could definitely appreciate the skill it took to execute the stunning blow.

Less than 48 hours removed from his loss, Masvidal told ESPN’s Ariel Helwani that he was “a fan” of Usman’s strike. “The Nigerian Nightmare” earned a knockout victory after catching Masvidal with a perfectly timed right hand in the second round of their welterweight championship bout, becoming the first fighter to defeat Masvidal via KO.

“I look at it, and I’m like, ‘Wow, perfect timing, misleading.’ I thought he was going in for a shot, and when I realized it wasn’t a shot, it was too late,” Masvidal said. “I was throwing my check left hook, but it was already too late. I read the information wrong. So he sold it to me beautifully, and that’s why he got those results.

“Gosh. Of that moment right there, I am a fan. Because I love the sport so much. It’s just beautiful technique.”

Masvidal, who lost via unanimous decision in his first meeting against Usman at UFC 251, told Helwani that he had a healthy respect for Usman’s punching power. The problem was that Masvidal anticipated more wrestling exchanges, and when he let his guard down, Usman capitalized.

“It’s so captivating. It’s amazing. Anything can happen at any moment.”

You can watch Helwani’s full interview with Masvidal below.