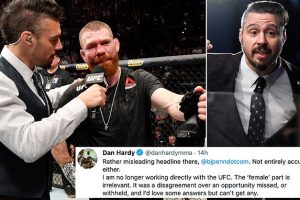 MMA commentator and analyst Dan Hardy has confirmed he is ‘no longer working directly’ with UFC amid reports he had an argument with an employee while on Fight Island.

A report in The Wrestling Observer claimed Hardy was sacked by UFC and its British broadcast partner BT Sport after he got into an ‘argument’ with a ‘female employee’ while in Abu Dhabi recently.

Hardy’s absence from recent UFC events has been noted by viewers but on Sunday night he took to Twitter to question the authenticity of a story that suggested he had been ‘fired’. 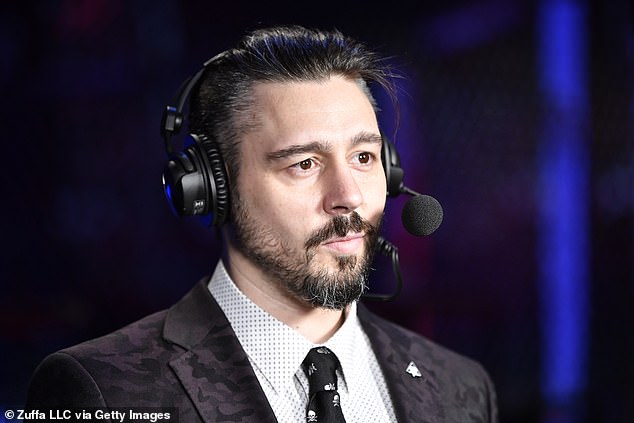 Commenting on a story published by MMA news website BJPenn, Hardy tweeted: ‘Rather misleading headline there, @bjpenndotcom. Not entirely accurate either.

‘I am no longer working directly with the UFC.

‘The “female’ part is irrelevant. It was a disagreement over an opportunity missed, or withheld, and I’d love some answers but can’t get any.’

In response to an apology from BJPenn, Hardy wrote: ‘I knew it would be painted this way when it came out. It’s a part of the game at play, I suppose.

‘I’m confident that most people know my character, and recognize the words added for effect over fact.’ 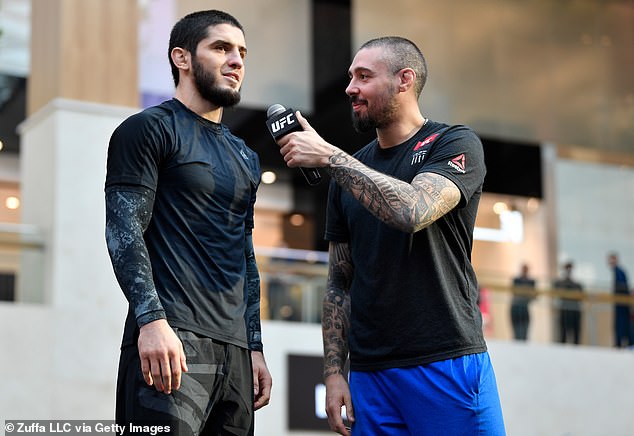 Hardy, pictured interviewing Islam Makhachev in 2019, stepped away from the Octagon due to a heart condition

The former UFC welterweight title contender turned to commentary after he was forced to step away from the Octagon because of a heart condition and quickly worked his way up to analysing the big fights.

Last year, Hardy made headlines when he was involved in an argument over a decision made by referee Herb Dean during UFC Fight Island 3.

Hardy demanded Dean stop a fight between Jai Herbert and Francisco Trinaldo when the former was knocked out.

The pair then had an argument after the fight had concluded, which was caught on camera, and it prompted UFC to investigate the incident.

He has vowed to continue his analysis of UFC fights though, saying he’s ‘not going anywhere’

In the aftermath of the argument, both men released videos in a bid to put their point of view across. Dean insisted his decision to end the fight was correct while Hardy insisted he ‘needs to understand a mistake was made.’

Following the allegations he had been sacked, Hardy then later tweeted that he is ‘not going anywhere’ and will continue to analyse the UFC’s major fights in another way.

He added: ‘Thank you for the kind words and support. I’m doing just fine, and am not going anywhere. I’ll still be breaking fights down on my channel, and elsewhere…

‘I’m here in service of MMA, and sometimes that puts you on the other side of the line. I’m fine with that.’