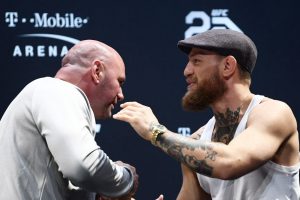 Conor McGregor has been badgering UFC president Dana White with an array of questions ahead of his rematch with Dustin Poirier.

And it is those text messages which have convinced White his star attraction is as hungry as ever.

McGregor will fight for the first time in 12 months when he clashes with Poirier at UFC 257 on Saturday week.

The Irishman has fought just twice in the cage in two-and-a-half years and has not held a title since 2016.

But White is confident the former two-weight world champion is ready to launch another assault on the lightweight division.

"The questions are always, 'This guy is so rich, how hungry is he?" he told ESPN.

"There's nothing more exciting or fun than a motivated Conor McGregor, when his head is in the right place and you can tell when he is and when he isn't, and right now, he's in.

"He's hitting me up and asking me questions about the layout of the arena, the walk-in, all these types of things that he's interested in knowing about right now; he's all in on this thing."

As it stands, there will be no belt on the line when McGregor and Poirier touch gloves in Abu Dhabi.

But White will hold talks with his lightweight champion Khabib Nurmagomedov in a bid to convince him to shelve his retirement plans.

The Dagestan native announced he was quitting last October following his win over Justin Gaethje – but White is confident he can win him round.

Whatever Nurmagomedov's decision, he expects McGregor to lead the way in the 155lb division this year.

"The way this kid is right now, mentally, physically, emotionally, this kid is on and ready to fight," he added. "I would love to see him focus on what he can do here in the UFC, whether that's take another shot at the title against Khabib or fight for the title against somebody else if Khabib retires, and defend that title."