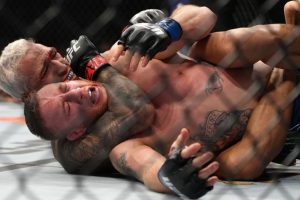 UFC 274 returned to Phoenix for the first time since 2019 with an action-packed main card. Charles Oliveira faced Justin Gaethje in the main event title fight, but only the latter had a shot at claiming the belt. Oliveira failed to make weight Friday, which meant his title was stripped “upon the start of the main event headliner,” according to the UFC in a statement.

Although he didn’t get the opportunity to properly defend his championship, Oliveira entered Saturday with momentum. He won 10 straight matches, his last being a submission victory over Dustin Poirier in December. Before the fight, Oliveira’s 18 finishes and 15 submissions were the most in UFC history, per ESPN Stats & information.

Gaethje entered UFC 274 having won five of his prior six matches. His latest match was in November, when he won via unanimous decision against Michael Chandler. Gaethje knows how to hit, having landed 7.5 significant strikes per minute at a 60.1% rate, both the best in his division.

But before Gaethje and Oliveira’s fight, Chandler’s bout against Ferguson was a thrilling affair. It ended in an instant, as the 36-year-old fighter landed a vicious front-kick in the second round that knocked out Ferguson.

During the postfight interview, Chandler called out former UFC fighter Conor McGregor. The Irish mixed martial artist was aware of Chandler’s victory Saturday, tweeting that he is down to fight Chandler.

Chandler’s KO victory has the Twitterverse buzzing with reactions.

The main event didn’t go past the first round, but it provided plenty of entertainment. Oliveira came out on top as the winner via submission. His 11-fight win streak comes at a cost. Since he missed weight, the title will remain vacant. Nevertheless, Oliveira exited the octagon with a win and is the No. 1 contender in his division.

Stars across the world took to social media with their thoughts on UFC 274’s main event: