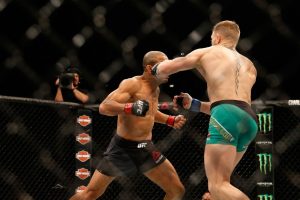 Conor McGregor will go back to his roots as he prepares to take on Dustin Poirier for a third time.

McGregor is facing a make-or-break clash with his lightweight rival at UFC 264 on July 10.

Victory should propel him to a title shot but defeat could make the beginning of the end of his illustrious career.

And as he celebrates the anniversary of his first fight in the UFC, McGregor plans to replicate the training camps which led him to victory over Jose Aldo – and his first UFC title – in 2015.

He tweeted: "My UFC debut I found out [about] nine weeks out. I took a week to get right from not training/partying, and then eight weeks out I moved to my sisters apartment which was close to the gym.

"I also didn’t take rest days unless I absolutely had to. Not one. Not even a Sunday. I will take this approach again for my comeback fight.

McGregor was stopped in the second round by Poirier in their January rematch, seven years after the Irishman won their first fight by first-round KO.

Poirier then rejected the chance to fight for the vacant lightweight title to instead pursue a third fight with McGregor.

Poirier announced last week that he had signed his contract before McGregor confirmed the fight was on.

Michael Chandler and Charles Oliveira will meet for the vacant belt on May 15 following Khabib Nurmagomedov's announcement that he would not be returning.

McGregor's clash with Poirier is likely to take place at the T-Mobile Arena in Las Vegas, assuming the venue is able to operate at full capacity following the coronavirus crisis.

Abu Dhabi, which played host to the rematch, is also in the running to stage the crossroads bout.