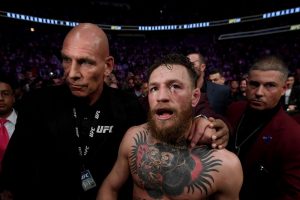 Conor McGregor has not ruled out confronting Khabib Nurmagomedov if he continues to avoid a rematch.

The rivals fought in 2018 with Nurmagomedov choking out the Irishman in the fourth round.

McGregor has long craved a second shot but watched as his adversary announced his retirement from the sport last year.

He remains hopeful that Nurmagomedov will agree to a sequel – and is willing to take things into his own hands if he doesn't.

"As long as we fight again, there will be no issue," he said. "If he continues to run, I'm not sure, so we'll see what happens."

McGregor must first take on Dustin Poirier in Abu Dhabi on Sunday morning in a rematch of their 2014 meeting.

Nurmagomedov claimed last weekend that he would be willing to face either man if they impressed him sufficiently.

But the lightweight champion has since backtracked on those comments.

And McGregor added: "I don't really care, he did not say that… Dana [White] said that. Let's get through the fight.

"It's a tough business; things have gone on his personal life, I don't wish him any harm, it was in 2018, a lot time has passed.

"The world knows this fight is not over, this war is not over. The sport needs it to happen, the people need it to happen but I'm not going to chase it.

"I'll keep my calm and move on. I'm back here in the 155lb division and I'll show the world what's what over time and it begins against Dustin Poirier."

There will be no belt on the line when McGregor takes on Poirier but Nurmagomedov has insisted he will not hold up the division.

He is due to hold further talks with UFC president White when the pair return to Las Vegas next week.