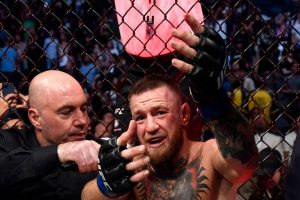 Dana White has claimed Conor McGregor was suffering from chronic arthritis in his ankles long before his defeat at UFC 264.

The Irishman broke his leg in the first round of his trilogy bout with Dustin Poirier and required surgery immediately after the contest.

He has since claimed he was carrying stress fractures into the fight as well as having a scan on his ankle during his training camp.

And UFC president White has revealed McGregor has been struggling with long-term problems in his ankles, but did not address any other injury worries in camp ahead of the bout for the 33-year-old.

(McGregor) has had ankle issues for (the) last couple of years,” White told Fox News.

“He had asked if he could tape his ankles coming into this fight and he got clearance to do it from the Nevada State Athletic Commission and then he opted not to tape them. I don’t know why. He has chronic arthritis in his ankles.

“It’s going to take him a year to recover from this one before he can come back, so I don’t know.

“We’ll see. The fight game is a tough game and the kid has cemented a massive legacy for himself and made a lot of money. We’ll see how the rest of his career plays out.”

McGregor's immediate future in fighting could be bleak after he received a medical suspension for his injury, with the former two-division champion set to be ruled out for up to a year.

However a doctor has since cast his doubts on claims that 'The Notorious' was injured ahead of the fight, stating that he saw no 'stress fractures' on scans and photos.

But McGregor released a video from a mobility scooter recently, clarifying his situation before the fight and has also attached photos of the injury to prove his case.

“The leg is better than ever, I was injured going into the fight. People are asking me, ‘When was the leg broke? At what point did the leg break?" McGregor said.

"Ask Dana White, ask the UFC, ask Dr. Davidson, the head doctor of the UFC, they knew, I had stress fractures in my leg going into that cage.

"There was debate about pulling the thing out because I was sparring without shin pads, and I was kicking."

Several fighters have since mocked the original injury that McGregor suffered against Poirier forcing him to withdraw including former opponent Floyd Mayweather.

Jake Paul has also weighed in on the situation, labelling the Irishman ' a piece of s***' and also delivering an expensive chain mocking the stoppage in the second fight against Poirier.

McGregor also aimed a dig at Jose Aldo during his injury update, after the Brazilian pulled out of their scheduled contest back in 2015, but has been heavily criticised for his post-fight antics so far.

His critics include Paul Felder who has delivered a strong message encouraging McGregor to 'never set foot in the UFC again', while Firas Zahabi has also claimed that the Irish star 'would be sacked ' if he wasn't so famous.