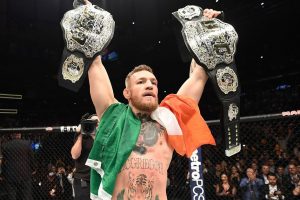 Conor McGregor has a third world title in his sights as he continues his rehabilitation from injury.

McGregor has been sidelined since July after suffering a broken leg in his defeat to Dustin Poirier at UFC 264, and is yet to set a date on when he will return to the octagon.

The 33-year-old, beaten in Las Vegas via doctor’s stoppage at the end of the first round, has since claimed he went into the clash with multiple stress fractures.

It was the second time he had been conquered by Poirier, 32, in 2021 – after the American inflicted the first knockout loss of McGregor's career back in January.

During his current lay-off, speculation over whom 'The Notorious' will fight next has been rife, with a fourth bout with 'The Diamond' or a trilogy fight with long-time rival Nate Diaz thought to be his most likely options.

McGregor has also been called out by fighters from other combat sports, with YouTuber Jake Paul regularly goading the Dubliner about a possible boxing clash, while kickboxer Superbon Banchamek has said he wants a mixed-rules bout with the 33-year-old.

Last week, he broke his silence on his planned opponent by tweeting he would be fighting whoever is the lightweight champion when he returns – which could yet be Poirier after he challenges Charles Oliveira for the belt at UFC 269 on December 11.

In a special Twitter 'Q&A' with fans on Sunday morning though, McGregor said it would be another four months before a return could be considered imminent.

Having been asked by @Chewy9991 "When you targeting to be fully healed and back in the octagon?" – McGregor replied "I will be full mixed martial arts sparring by April. Easily!

"By then a return will be imminent. But I must be patient. I will beat this!"

His admission suggests a fight before the summer of 2022 is unlikely, with @CageTaIkUFC telling fans "I would assume he’ll get something for July again."

McGregor also seems hell-bent on completing his trilogy with Diaz, who he lost to in March 2016 before before avenging that result five months later.

Asked if he and the 36-year-old American would fight again, the Irishman emphatically replied "1 billion per cent! A must!"

During the session McGregor, who has two fights left on his current UFC contract, also declared "I’d love to be with the UFC for life. I am the UFC!"