Home » MMA » Conor McGregor called out for grudge fight by "who da f*** is that guy?" rival

Conor McGregor called out for grudge fight by "who da f*** is that guy?" rival 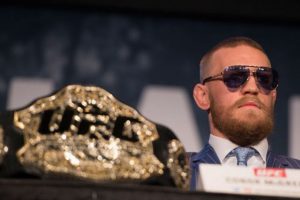 Five years after their infamous exchange at a UFC press conference, Jeremy Stephens believes all signs now point to a grudge fight with Conor McGregor.

Stephens had a run-in with McGregor before both men competed at UFC 205 in 2016, a moment that has been become a soundbite whenever McGregor's name is brought up.

When a reporter asked McGregor who would give him the hardest fight out of all of those on stage, Stephens took his chance to stake his claim.

"Right here, the real hardest-hitting 145-pounder right here. This guy TKOs people when I knock people out, they don't f****** move." he replied.

And McGregor would go on to reply with the hilarious one-liner: "Who da f*** is that guy?"

Since that exchange, both Stephens and McGregor have struggled to put together a string of wins in the UFC. Stephens is without a win in his last six fights, whilst McGregor has only won one of his last four appearances.

McGregor recently had surgery after suffering a broken tibia in his trilogy fight with Dustin Poirier at UFC 264. Stephens, who lost by heel-hook submission in his lightweight return last weekend, thinks the stars have aligned for a fight with the Irishman.

"Just thinking… the true fight to make is me and Connor. He broke his ankle, someone dove for my ankle. We both like to fight and keep it standing. Both power both different. Plus I like to calve kick and have wide range of KO’s," Stephens wrote on Twitter.

Last year McGregor admitted that he did know who Stephens was at the time, and thinks highly of him as a fighter.

How would a fight between McGregor and Stephens play out? Comment below

"Of course I knew who Jeremy was … Jeremy's a good fighter, he was a former lightweight then moved down to the featherweight division. Good power in his hands," McGregor said.

"But the timing was just impeccable there and that was it."

The Irishman's fighting future is very much a grey area as he is set to be ruled out for up to a year. UFC president Dana White revealed that McGregor has chronic arthritis in both ankles, something that has troubled him long before his recent loss to Poirier.

McGregor faced heavy criticism for threatening to "kill" Poirier after the fight and going after his family.

Retired UFC fighter Paul Fighter encouraged him to "never set foot in the UFC again", whilst accomplished MMA coach Firas Zahabi said McGregor's stardom allows him to get away with such comments.