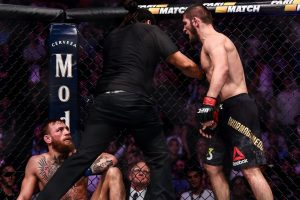 The two went head-to-head at UFC 229 in October 2018 with Nurmagomedov successfully defending his lightweight title via submission.

There had been extensive speculation regarding a rematch only for the former lightweight world champ to announce his retirement.

Nurmagomedov, 32, decided he would be leaving the UFC following his win over Justin Gaethje in October of last year, a decision which has since been confirmed.

However, that has done little to stop McGregor taking shots at his old foe in a series of now-deleted posts on the social media site.

The Notorious was initially responding to a user who claimed the commentary on their bout was biased towards his opponent.

He replied: "Real dirty. I've felt the commentary wrath a few times. Imagine this was the round I had won too.

"The guy was holding onto me crying to referee saying I was breaking the rules or some s***.

"And they try and say that I said this only business s***. Absolute horse plop."

And in a subsequent reply to a tweet which claimed he cheated by holding Khabib’s shorts, he said: "I wasn't holding his shorts! I was ramming my fingers up his homophobic ass.

Although a rematch with Khabib is unlikely, McGregor will get a chance to exact revenge on his most latest defeat, when he takes on Dustin Poirier in their trilogy deciding fight in July.

The Irishman has promised a ‘flawless performance’ as he looks to re-enter the title picture at 155lbs.

“July 10th I will do this absolutely flawlessly,' McGregor said. “We have these clowns sussed and fully!

“They wanna play a game of tactics? No problem, see you in there.

“You've awoken a beast. A beast with the backing of a much higher power!