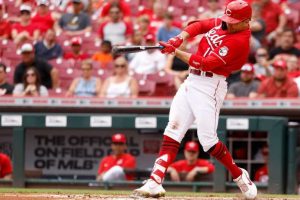 This is how it’s done.

Reds fans in the past haven’t been so lucky with trying to get to home run balls in the stands, with a Cincy fan recently losing everything but his pride en route to an Eugenio Suarez blast.

On Thursday afternoon, though, Reds fandom was officially redeemed: Check out this grab by a young Reds fan in the stands, selling out for the ball, giving up his body for a Joey Votto game-tying home run.

The fan stretches out and makes the grab, tumbling onto some seats, securing the catch. He raises to his feet to applause and gets praise from the Reds booth.

With Votto’s power numbers dipping in recent years, the catch is probably especially sweet for the young fan. The homer was Votto’s sixth on the year and his fourth at home in Cincinnati.

Maybe the Mets can give this kid a call.