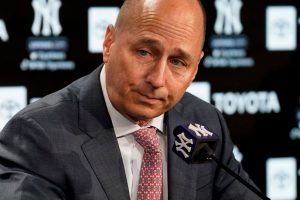 The New York Yankees have re-signed Brian Cashman to a four-year contract, the team announced.

The new deal will run through the 2026 season, and Cashman, 55, will retain the title of senior vice president and general manager.

The longest-serving general manager in franchise history, Cashman built a club that won the American League East last season and advanced to the ALCS, where it lost to the Houston Astros.

The Yankees have posted a winning record in each of Cashman’s 25 seasons as general manager but haven’t won a World Series since 2009, when they defeated the Philadelphia Phillies.

The news comes as Major League Baseball holds its winter meetings in San Diego. Among the key talking points at the meetings is the future of Yankees star outfielder Aaron Judge, a free agent coming off a historic season in which he set the record for AL single-season home runs. Judge is believed to be deciding between staying with the Yankees or going to the San Francisco Giants.

Cashman and the Yankees offered Judge $213.5 million over seven years in the spring, a deal that would’ve made Judge the second-highest-paid outfielder in the majors, behind Mike Trout. In keeping with his habit in negotiations, Judge said no. There was no counteroffer, no further bartering, and then he went out and had a season for the ages.

While Judge remains on the market, Cashman was able to re-sign Anthony Rizzo on Nov. 15 to a two-year contract worth $40 million after turning down a $16 million player option.