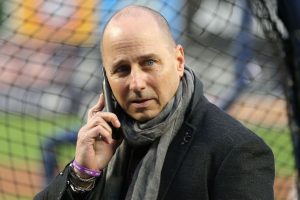 Marly Rivera is a writer for ESPNdeportes.com and ESPN.com.

“I don’t think anybody’s going to dance to the tune he’s singing,” Cashman said before the first game of a four-game set against the White Sox at Guaranteed Rate Field on Thursday. “I’d say it’s called deflection, him trying to equate probably … an equivalent of a parking ticket to maybe 162 felonies.”

Cashman was responding to Crane’s comments to USA Today earlier this week. Crane disputed the New York executive singling out the Astros’ sign-stealing scandal as one of the reasons for the Yankees’ recent championship dry spell in an interview with The Athletic during the spring.

“The only thing that stopped [the 2017 Yankees] was something that was so illegal and horrific,” Cashman said earlier this spring. “So I get offended when I start hearing we haven’t been to the World Series since ’09’. … The only thing that derailed us was a cheating circumstance that threw us off.”

In the letter, Manfred said an MLB investigation found the Yankees to have engaged in illegal use of their video replay room to steal signs and then relay them to the dugout in 2015 and 2016. The letter also stated the Yankees’ illegal use of an iPad to watch a live game broadcast from the bullpen in June 2017. MLB fined the Yankees $100,000, and the funds were allocated for Hurricane Irma relief.

“There’s the letter, and you were doing it, too,” Crane told USA Today. “You were there, dude. What are you talking about? If I was one of the teams, and I knew our team was doing it, I’d keep my mouth shut and just go about our business.”

Cashman pointed out the fact that the letter did not state the Yankees engaged in any real-time conveyance of signs to the hitters during live at-bats, which was the threshold established in the Astros’ case in 2017.

“I don’t think anybody equates it to what the Astros did except for Houston,” Cashman said. “[That is] the feedback from everybody in the industry, including Major League Baseball.”

In a statement after the letter was released, the Yankees pointed out that the club was not being penalized for sign stealing but “for improper use of the telephone in the replay room,” and noted that during the years in question, “sign stealing was utilized as a competitive tool by numerous teams … and only became illegal after the commissioner’s specific delineation of the rules on September 15, 2017.”

And despite Yankees president Randy Levine’s strong push to keep the letter under seal, Cashman said he didn’t mind its release.

“There’s nothing from that letter for us to fear,” Cashman said.

Manfred issued a memo to all teams in September 2017, warning that he would hold all staff accountable for sign-stealing violations, and that violators would face stiff penalties.

In the Astros investigation, MLB determined extensive, real-time, systematic sign-stealing violations during their 2017 championship run, leading to myriad suspensions and fines, including the dismissals of manager AJ Hinch, then Astros bench coach, and now Red Sox manager, Alex Cora, and Houston general manager Jeff Luhnow. Former Astros player Carlos Beltran, now a broadcaster for the Yankees’ YES Network, resigned from his new position as manager of the New York Mets after the scandal.

“No one’s buying the tune he’s singing, no one’s going to dance to that tune,” Cashman said of Crane’s comments. “And the reason I kind of equated it to a parking ticket vs. a felony is, as you recall, they lost multiple years of first-round draft picks, they were fined millions of dollars and decided to fire their manager and general manager because of their actions. There’s no equivalent to any of it. So that’s why I said it’s a deflection. No one’s buying it. No one’s singing to that dance tune. It is what it is. But I applaud him for trying.”