Woman: Felt like ‘rag doll’ in encounter with Bauer 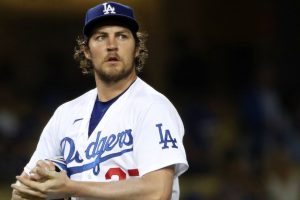 LOS ANGELES — As she sat on the witness stand, the woman accusing Trevor Bauer of domestic violence and sexual assault pulled her hair around her neck to show a judge how she alleges the Los Angeles Dodgers pitcher strangled her unconscious.

It was one of several emotional moments that took place on the first day of a multi-day hearing to determine if a temporary restraining order placed against Bauer will become permanent, which in California means up to five years.

The 27-year-old woman testified for about four hours in L.A. County Superior Court on Monday while Bauer sat silently in his seat, keeping his attention focused on the judge in front of him. His attorneys have said the two sexual encounters between the woman and Bauer were “wholly consensual” and have promised to refute her claims “to the fullest extent of the law.”

The woman, who is not being identified by ESPN, was still answering questions from one of her attorneys when court ended near 4:30 p.m. PT. She will resume her testimony when the two sides reconvene at 8:30 a.m. PT on Tuesday. Bauer’s attorneys, who began the day by seeking a third continuance, will then be given the opportunity to cross-examine. The hearing is scheduled until Thursday.

At one point the woman testified that she was unable to move or speak after Bauer choked her unconscious during their second encounter on May 16. At the behest of her attorney, she had pulled her hair in front of her neck to show how she said Bauer sat on her back and pulled “very tightly” until she couldn’t breathe.

While describing the other violent acts originally outlined in the declaration attached to her temporary restraining order — most notably how Bauer allegedly took a closed fist to her jaw, vagina and buttocks — the woman said, “I didn’t say anything to him, he didn’t say anything to me. It was like I was a rag doll.”

“I was scared of him,” she said at another point. “I was in so much pain.”

Bauer is currently under criminal investigation by the Pasadena (California) Police Department and is on administrative leave by Major League Baseball, which is conducting its own investigation into the alleged incidents. Bauer’s leave has been extended five separate times with consent by the MLB Players’ Association; his latest stint is set to expire on Friday.

Bauer, the National League Cy Young Award winner in 2020 and the highest-paid player in 2021, has been away from the Dodgers since July 2. The Dodgers have mostly remained quiet about Bauer’s situation over the last few weeks. But in an internal e-mail sent to hundreds of team employees on Monday afternoon, a copy of which was obtained by ESPN, Dodgers president Stan Kasten began by writing: “During the past couple of months, we have all been deeply troubled by the allegations that have been made against Trevor Bauer.”

Kasten added that the organization has chosen not to comment “in order to allow the legal process and MLB’s investigation to proceed without interference,” later adding that the organization “takes all allegations of this nature very seriously and does not condone or excuse any acts of domestic violence or sexual assault.”

Kasten also said in the e-mail that the team “had no knowledge of the temporary restraining order that was issued against Bauer and placed under seal in Ohio, or of the allegations made in connection with that order, until recent reports.” The Washington Post published a story Saturday stating that an Ohio woman accused Bauer of punching and choking her during sex in their three-year relationship and that she filed a restraining order petition last summer, while Bauer played for the Cincinnati Reds, but withdrew the request six weeks thereafter. Bauer’s agents called those woman’s allegations “categorically false.”

Bauer’s attorneys began day one of the hearing by asking Judge Dianna Gould-Saltman to dismiss the restraining order. Bauer’s representative, Shawn Holley, argued that the encounters didn’t qualify as domestic violence or an intimate relationship because the “only acts of violence occurred during sex,” which she argued was consensual, and that there is no threat of a recurrence of domestic violence.

Bauer’s attorneys then asked for a continuance, citing pending medical records, deleted social-media videos and what they believed to be questionable gaps in text-message exchanges between the woman and two friends, among other issues. When the judge ordered that the case continue as scheduled, both sides delivered lengthy opening statements that, combined, lasted about an hour.

Holley dedicated much of her opening statement to text messages sent by the woman to Bauer and members of her inner circle that, according to Bauer’s team, suggest an ulterior motive. She highlighted text messages from the woman alluding to a desire to be choked out and telling a friend, “I already have my hooks in.”

The woman addressed those messages during a lengthy, emotional testimony in which she opened up about her sobriety, her insecurities, and a desire to have a relationship with Bauer that extended beyond intercourse. She said she was inexperienced with rough sex, alleging that she had never been choked unconscious and that she partly followed along in an attempt to satisfy Bauer’s wishes.

She added that she was “embarrassed” and “was nauseous” after after being choked out during the first sexual encounter and said she wanted to meet with Bauer again in an attempt to “create a better experience where we were both on the same page.”

When she arrived at Bauer’s home after midnight on May 16, the woman testified that he “was doing some kind of treatment on his legs” and “was in a very amped up state,” having just finished pitching a game that night. She testified Bauer, who has been very outspoken in recent years against pitchers’ use of foreign substances, told her about how he uses the substance Spider Tack. They then went to his bedroom for sex after a two-hour conversation, she said.

When she awoke after being choked unconscious again during their second encounter, the woman said she “felt knuckles in my jaw,” that “everything was happening so fast” and she felt so sick that she was unable to tell Bauer to stop.

“He was treating me like I wasn’t a human being.”