Home » Why is the NL East so blah? A team-by-team look at division struggles

Why is the NL East so blah? A team-by-team look at division struggles 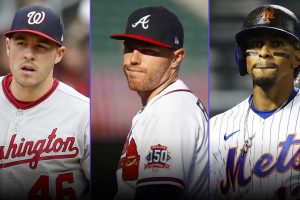 At 12-12 on the season, the Nationals’ record ranks seventh among 15 NL teams.

They would be three games out of first place in the NL West, two-and-a-half games back in the NL Central. But they play in the NL East, so they’re sitting in first place, a half-game ahead of both the Phillies (14-15) and Mets (11-12). The Braves (12-16) and Marlins (11-16) are within shouting distance still, despite slow starts to the season.

It’s early, sure, but this is not really what anyone expected. The Braves played at a 94-win pace in the shortened 2020 campaign and came within a win of the World Series. The Mets got a new owner (Steve Cohen) and a new superstar (Francisco Lindor) this offseason, and expectations were as high as they’ve been in years. The Nationals still have Max Scherzer and Steven Strasburg atop the rotation, with Juan Soto in a lineup with slugging additions Kyle Schwarber and Josh Bell.

The Phillies completely revamped a bullpen that tanked their playoff hopes in 2020, and retained key offensive pieces in J.T. Realmuto and Didi Gregorius. The Marlins were coming off a surprising playoff berth last year and brought back lots of young rising stars.

But here we are, in early May and the entire division is in a collective funk. It seems unlikely, of course, that the division will be won with a .500 record, but the thoughts of the Braves and Mets challenging for 100-win totals are probably gone. Before we look too far ahead, though, let’s take a look at what’s gone wrong so far.

Here’s why the Braves have been mediocre

The Atlanta offense has been wildly streaky so far this season, and when the bats go cold, they go very, very cold. The Braves scored a total of three runs in their first three games of the season, against the Phillies. They managed just one hit and zero runs in a double-header against the Diamondbacks on April 25. Ronald Acuña Jr. is hitting like an MVP candidate and Austin Riley has been very good of late, but most everyone else is off to a slow start. Batting averages aren’t everything, of course — like Wikipedia, a good place to start looking as long as you dig a bit more — but Freddie Freeman, Ozzie Albies, Dansby Swanson, Marcel Ozuna, Travis d’Arnaud (who’s now on the IL) and Cristian Pache are all batting .229 or worse.

Eventually, the Braves hope to have Mike Soroka and Max Fried back in the rotation, but the team can’t bank on health or sustained success for either. More immediately, the Braves need veterans Charlie Morton  (5.08 ERA) and Drew Smyly (8.05 ERA) to be better. The club signed both to one-year deals in the offseason — a practice that had been beneficial in recent years — but both have been disappointments so far.

Here’s why the Mets have been mediocre

Well, we know why the Mets’ brass thinks the club has been struggling around .500. The powers-that-be fired hitting coaches Chili Davis and Tom Slater after a loss to the Cardinals on Monday night. The timing felt a little strange, considering that the Mets had scored 17 runs in the previous three games (and won two of those three), but offensive production certainly had been an issue. In 12 of the first 23 games, the Mets failed to score more than three runs. They’ve lost three games started by ace Jacob deGrom when deGrom lasted at least six innings and gave up one or zero runs.

Here’s a deeper dive into what’s plagued the Mets’ offense so far this season.

Will it last? The offense will get better. Pete Alonso and Michael Conforto have already heated up after slow starts. Jeff McNeil, who owned a .319 career average in 248 games heading into this season, isn’t going to hit .235 all year. And Francisco Lindor? He’s a legitimate superstar in his Age 27 season facing the pressure of a new team, a new fan base and a new contract. He’s allowed a first-month hiccup. He’ll be just fine.

Here’s why the Nationals have been mediocre

Mostly, the Nationals have had trouble staying healthy. At the moment, both Juan Soto and Stephen Strasburg — two pretty key players — are on the IL. Jon Lester just finally came off the IL and threw five shutout innings in his debut with the team. Among position players, only four guys have played more than 17 of the club’s 24 games.

And some of the healthy guys have struggled. The team acquired Josh Bell and Kyle Schwarber to add punch to the lineup — the two combined for 75 homers in 2019 — but they’ve hit only four, with OPS+ numbers of 42 and 71, respectively. In the rotation, Patrick Corbin has had two good starts and three disastrous starts, adding up to an 8.10 ERA, and Eric Fedde (4.43 ERA) and Joe Ross (4.64) have been OK at best.

Will it last? At some point, the Nationals will get healthy. At least, that’s the hope. And if the regulars get back to their regular production, there’s no reason this team can’t contend. Max Scherzer has been his normal brilliant self and Brad Hand hasn’t allowed an earned run as the closer. Trea Turner has been outstanding (146 OPS+, with six homers and seven stolen bases), and veterans Ryan Zimmerman (.319 average) and Josh Harrison (.361) have been great.

Here’s why the Phillies have been mediocre

The Phillies might not have a massively glaring issue — their offense is OK though far from great, their pitching is OK but far from awful, etc. — but the .500ish record is what you get when a team with a small margin for error fails to do the little things right. On a lot of nights, those mistakes are made by the defense. Look at the Defensive Runs Saved (DRS) stat. The Phillies are 27th of 30 MLB teams, at minus-11. The Nationals, on the other hand, are plus-21. That’s a huge difference.

Here’s an example: In the April 29 game against St. Louis, the Phillies had a 1-0 lead in the fifth and Aaron Nola was cruising. Odubel Herrera dove for a ball he wasn’t going to catch and allowed the runner, Andrew Knizner, to hustle to second base. That extra base led to an intentional walk (a questionable decision by Joe Girardi), and that led to this …

Will it last? Let’s put it this way: If 96 or 97 wins is what it takes to win the NL East, the Phillies probably aren’t going to compete for the division title. But if the goal is 90ish? They could be in that conversation.

Here’s why the Marlins have been mediocre

Among teams that haven’t missed several games for COVID reasons, only the Pirates and Tigers — two teams expected to finish last in their divisions — have scored fewer runs this year than the Marlins, who have 107 in 27 games. They’ve been shut out four times already this year and scored two or fewer runs in 10 games. Starling Marte, Jazz Chisholm and Brian Anderson are all on the IL, though Anderson is expected to return soon. Marte’s likely out until June, and the club is hoping to have Chisholm back without an extended absence with a hamstring issue.

Will it last? The Marlins are a tough team to peg, but here’s the truth: With the outstanding trio atop the rotation (Sandy Alcantara, Trevor Rogers and Pablo Lopez), as long as the offense rebounds a bit and the rest of the rotation/bullpen is serviceable, the Marlins should stay within shouting distance of the division lead.