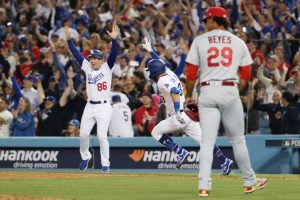 Viewers of the NL wild-card game between the Cardinals and the Dodgers on Wednesday night might have been confused as to why there were two commercial breaks, nearly back-to-back, in the bottom of the ninth inning.

Initially, the Cardinals sent right-hander Giovanny Gallegos back out to the mound after he pitched the eighth — but when the Dodgers announced Gavin Lux would pinch-hit, the Cardinals switched pitchers again, this time to southpaw T.J. McFarland, forcing TBS to cut back to commercial.

The decision, while at first unclear to viewers, was a pivotal one. Gallegos had been the team’s best reliever and had thrown just 12 pitches the previous inning. But manager Mike Schildt wasn’t done; after McFarland got the first two batters out in the inning, he walked Cody Bellinger and was set to face Chris Taylor. That’s when Schildt made another move to the bullpen to bring in Alex Reyes, who threw just four pitches. The last was a hanging slider that Taylor blasted over the left field wall for a two-run homer to win the game 3-2 and eliminate the Cardinals.

After the game, Schildt explained why he made those decisions. He said Gallegos was dealing with a “nail issue that prevented him from going back out” for the ninth, and that he only wanted to send his ace reliever to the mound in the final inning to force the Dodgers to burn Lux, a left-handed hitter. When McFarland came in, the Dodgers pulled Lux back — eliminating him from further usage in the game since he had already been announced — and brought in Albert Pujols, who has mashed left-handed pitching this season.

“We’ve got McFarland in there, keep them on the ground, you know it’s uncomfortable at bats,” Schildt said after the game. “We know they’re going to go to Albert and (Steven Souza Jr.), but we wanted a guy that’s going to be around the plate, on the plate. Got through those two guys.”

Nail issues are common for pitchers, given the way they are forced to grip and throw the ball. Schildt explained that, in fact, it has been a “recurring thing with some of our guys.”

McFarland has been about as much of a groundball specialist as a team could ask for. The 32-year-old compiled a 2.56 ERA in 2021, despite a 14.6 percent strikeout rate. The chief reason? A ridiculous 63.7 percent groundball rate that ranked fifth in the majors among relievers with at least 30 innings of work.

Having McFarland face Pujols and Souza was a gamble. McFarland has allowed right-handers a hard-hit rate of 42.3 percent this season, and they have a .739 OPS against him. Not to mention, Schildt knew who Dave Roberts would send out to face McFarland.

Pujols, a future Hall of Famer, has thrived against left-handed pitching this season to a .294/.336/.603 slash line, with 13 of his 17 home runs coming against southpaws. However, he has also hit into a higher groundball rate against lefties than righties, with a 48.3 percent groundball rate vs. southpaws. He lined out to center. Souza hasn’t seen consistent playing time in years — just 67 plate appearances since 2018 — and while he launched 30 homers in 2017, he has just seven since then. He, too, lined out to center.

Now Schildt had another decision to make: Should McFarland face Taylor? The answer to that was a resounding no. Taylor slashed .296/.371/.526 against lefties this season. With a total groundball rate of 36.3 percent (36.4 percent against lefties), he wasn’t a great matchup against McFarland, and Schildt knew that.

“Taylor’s really good against lefties. He’s not a guy that’s on the ground a lot,” Schildt said. “We’ve got a guy with swing and miss stuff. We’ve got a guy that (has) a little higher strikeouts against righties so we’ve got an advantage.”

Here is where the problem lay. Schildt wasn’t referring to ace Jack Flaherty, who has pitched out of the bullpen since returning from the injured list. It wasn’t Kodi Whitley, who since being recalled from Memphis on Aug. 28 had a 0.00 ERA with an 11.40 K/9 and 1.64 FIP in 15 innings. It was Reyes. On name value, it doesn’t seem like a bad pick. He was an All-Star just this past summer and was electric through the first half of the season. But this wasn’t the same Reyes who made it to Coors Field in July.

Coming out of the bullpen, Reyes immediately got a swinging strike on an 87.5 mph slider; then Taylor took a slider and a changeup in the dirt to gain count leverage at 2-1. Reyes’ slider spun right over the heart of the plate, and the rest is history.

“First couple sliders were really good, swings we were expecting, and then he got one he could put a swing on,” Schildt said. “That was the game.”