What’s wrong with the Mets — and can they fix it? 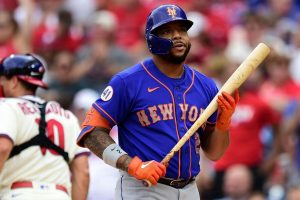 New York Mets fans rejoiced last offseason when the team’s sale to billionaire Steve Cohen was completed. Cohen quickly made his mark, most notably when the Mets traded for All-Star shortstop Francisco Lindor and later signed him to a 10-year, $341 million extension.

With an Opening Day payroll that ranked third-highest in MLB, the wish that the Mets would start acting more like a big-market team was coming true. But Lindor has struggled and is currently on the IL. Same for trade deadline acquisition Javier Baez. Ace Jacob deGrom, who set an early pace for a historic season, has now missed significant time due to injury, and his return to the rotation remains a question mark.

The Mets led a weak NL East for much of the season, but with a losing record so far in the second half, they now find themselves trailing both the Philadelphia Phillies and Atlanta Braves, while also battling to simply stay above .500.

What has hurt them most of late? Can they turn it around and make the playoffs? And what does it mean for Cohen & Co. if they don’t? We asked ESPN baseball experts Bradford Doolittle and David Schoenfield to weigh in.